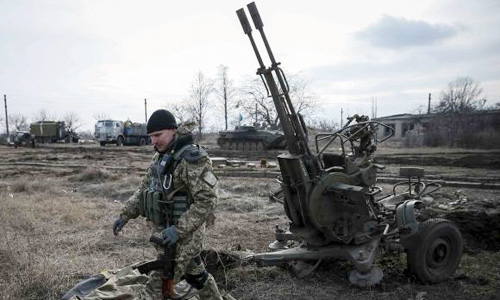 WASHINGTON (Reuters) - Some 10,000 US M-16 rifles and other military supplies worth about $17.9 million arrived in Iraq this week as US troops pushed ahead with training and supplying Iraqi security forces battling Islamic State fighters, the Pentagon said on Tuesday. The update on US efforts to arm Iraqi troops followed an unusual, detailed briefing last week on preparations for an operation this spring to retake Iraq's second biggest city, Mosul, from Islamic State militants. Pentagon spokesman Army Colonel Steve Warren said 10,000 red-dot optical sights and 100,000 ammunition magazines were also sent to Iraq, part of an expedited foreign military financing deal that was completed in 22 days, a quarter the normal time. Thousands of Kevlar helmets and body armour plus 250 armoured, mine resistant vehicles were delivered to Iraq in January. Warren said the United States sent 232 Hellfire missiles to Iraqi forces on Feb. 15, adding to the 1,570 sent last year. He said radios for the armoured vehicles would arrive next month. Last week an official at the US military's Central Command told reporters that American and coalition troops would soon begin training Iraqi forces who are due to participate in the assault to retake Mosul. The official said an Iraqi and Kurdish force of 20,000 to 25,000 was needed for the offensive, which could take place as soon as April or May if troops were ready. Republican Senators John McCain and Lindsey Graham have complained in a letter to President Barack Obama that the military had "briefed our own war plans to our enemy." On Tuesday, Warren declined to comment on whether too much had been said at the briefing or to characterize it as a mistake. "I think it was important that ... CentCom (Central Command) conducted a briefing last week. It's important that we're as transparent as we can be with both the press and the American public so that they understand what ... we're trying to do," he said. Central Command has not regularly briefed on the campaign against Islamic State, other than to release figures about its daily air strikes. Much of the information shared at the briefing had already been made public, either through testimony by officials in congressional hearings or in media reports on the conflicts in Iraq and Syria.