US believed security for Seoul ambassador adequate before attack 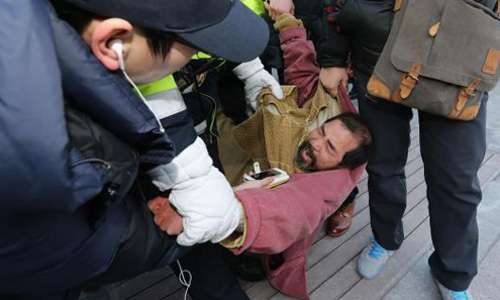 US believed security for Seoul ambassador adequate before attack

WASHINGTON - US government experts believed security for the US ambassador to South Korea was adequate before he was slashed by a knife-wielding attacker, in spite of current high tensions with North Korea, the State Department said on Friday. US ambassador Mark Lippert needed 80 stitches after his face was cut at a forum discussing Korean unification in Seoul on Thursday by an assailant who had made multiple visits to North Korea between 1999 and 2007. [ID:nL4N0W8062} South Korean police said they were investigating possible links between the attack and the visits, but State Department spokeswoman Marie Harf said the motive was still not known. "We are still getting all the facts about how people were screened to get in to this event, how they were on the list, how they were allowed in," she told a regular news briefing, adding that the embassy was coordinating with the Korean-led probe. The attack was carried out by 55-year-old Korean nationalist Kim Ki-jong, now under arrest, who said he was protesting against annual US-South Korean military exercises that began this week. Harf said security for US ambassadors around the world was based on assessments by experts from the department's Bureau of Diplomatic Security and said Lippert had been assigned a single South Korean National Police bodyguard. Since the attack, Harf said, Lippert's security had been boosted with several other South Korean police officers and the United States would "see if anything else needs to be done." She said she had not heard of plans to boost diplomatic security elsewhere in the world following the attack. Asked if Seoul should have been considered a high-risk area, given increased tensions withNorth Korea over current US-South Korea military exercises and a cyber-hacking dispute sparked by a US movie Pyongyang considered insulting to its leader, Harf replied, referring to US security experts: "Their professional judgment was that it wasn't." Other South Korean police were present at the time of the attack but not at the request of the US embassy. - Reuters