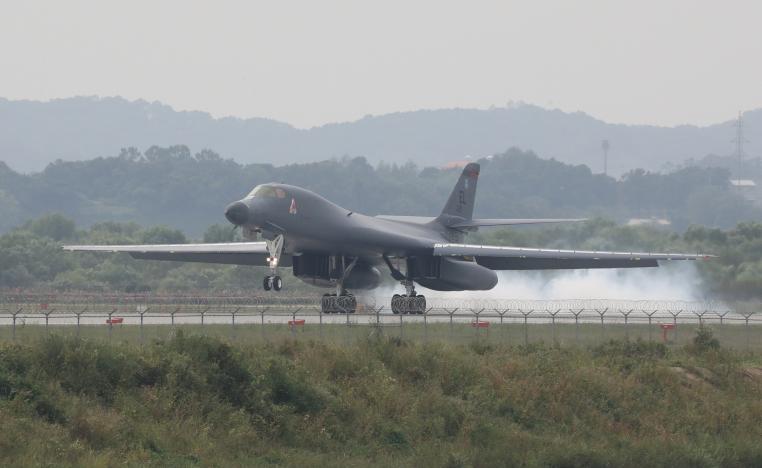 OSAN - Two US supersonic bombers flew over South Korea on Wednesday, with one of them landing at an air base 40 km (25 miles) south of the capital, the second such flight since North Korea's Sept. 9 nuclear test. US Forces Korea said the flight by a pair of B-1B Lancer strategic bombers based in Guam was a show of force and of US commitment to preserve the security of the peninsula and the region. The United States, which has about 28,500 troops in South Korea, flew two B-1 bombers on Sept. 13 escorted by US and South Korean fighter jets in a show of solidarity with Seoul. The North condemned the earlier flight as an armed provocation that mobilized "ill-famed nuclear killing tools". It did not immediately respond to Wednesday's flight. The US Air Force said the Wednesday flight was the closest ever to North Korea by a B-1 bomber. "Today marks the first time the airframe has landed on the Korean peninsula in 20 years, as well as conducting the closest flight near North Korea ever," the US Air Force said on its website which also showed a B-1B bomber landing at the base in South Korea. The South's Yonhap news agency said the aircraft flew over a US live-fire training site in the Pocheon area bordering the North. North Korea has ignored global condemnation of its fifth nuclear test on Sept. 9, and this week said it had successfully tested a new rocket engine that would be used to launch satellites, again in violation of U.N. sanctions. The leaders of the United States and China, which is the North's main diplomatic ally and economic benefactor, condemned the latest nuclear test and pledged to step up cooperation at the United Nations and in law enforcement channels. CHINA URGES RESTRAINT UN diplomats say the two countries have begun discussions on a possible U.N. resolution in response to the latest nuclear test, but China has not said directly whether it would support tougher steps against North Korea. China, which has objected to a planned US deployment of a THAAD missile defence system in the South to counter the North's missile threat, called on "all parties to exercise restraint and to avoid any actions that could further escalate tensions". South Korea's prime minister, Hwang Kyo-ahn, told parliament South Korea wanted existing U.N. sanctions against the North tightened by removing loopholes that allow it to trade in minerals if it is for subsistence. North Korea has been testing nuclear weapons and ballistic missiles at an unprecedented rate this year, beginning with its fourth nuclear test in January and including the launch of a satellite in February that was widely seen as a test of long-range ballistic missile technology. The North's test of a new rocket engine for satellite launchers this week was believed to be part of a long-range missile programme, according to the South's military. North Korea's leader, Kim Jong Un, ordered preparations for the launch of a satellite "as soon as possible" on the basis of the successful test, its state media reported. North Korea this month fired three missiles that flew about 1,000 km (600 miles), and in August tested a submarine-launched ballistic missile that experts said showed considerable progress. It also launched an intermediate-range missile in June that experts said marked a technological advance for the isolated state after several failed tests. South Korean Defence Minister Han Min-koo told parliament the North was developing all types of missiles, from short- to long-range, and its advances were "considerable". -Reuters