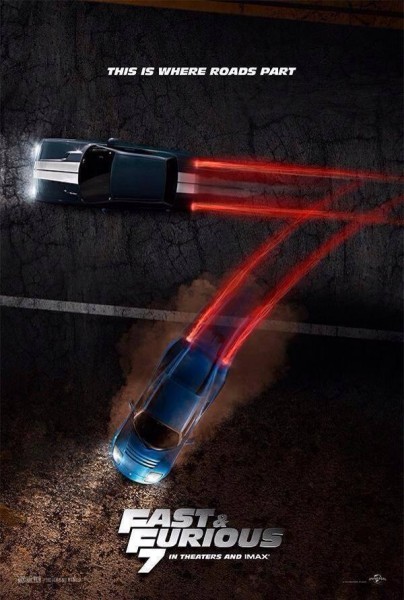 LOS ANGELES - It wasn't even a contest. "Furious 7" roared to the top of the box office chart for the second weekend in a row, picking up $60.6 million and driving its stateside total to a massive $252.5 million. That's a slender 59% drop from the Universal Pictures release's record-breaking $147.2 million debut and puts "Furious 7" on track to be the highest-grossing release in the history of the "Fast and Furious" franchise. Records kept getting left in the rear view mirror. "Furious 7" is now the fastest Universal release to cross $200 million, jetting by that barrier in only eight days. It took "Despicable Me 2," the studio's previous high-water mark, 11 days to reach that milestone. "Furious 7" is also one of only a dozen movies to do more than $60 million in its second weekend. DreamWorks Animation's "Home" continued to rope in family audiences, scoring a second place finish and $19 million. The alien invasion film has earned $129.6 million in three weeks of release. Newcomer "The Longest Ride" debuted to $13.5 million across 3,366 theaters, in line with projections. However, the Fox release was on the low-end of debuts for a film based on a Nicolas Sparks' literary property, failing to match "Safe Haven's" $21.4 million bow or the $22.5 million kick-off for "The Lucky One." Audiences seemed to enjoy the romantic drama, handing it an A CinemaScore rating. "The Longest Ride" centers on a former rodeo star who falls for a college student with dreams of life in the Big Apple. It cost $34 million to produce and stars emerging stars Scott Eastwood (son of Clint) and Britt Robertson (soon to make waves in "Tomorrowland"). Prison comedy "Get Hard" picked up $8.6 million in its third weekend of release to nab fourth place. The Warner Bros.film has earned $71.2 million since debuting in March. In limited release, "Ex Machina" did impressive business, picking up $249,956 from four screens. The science-fiction thriller was buoyed by sterling reviews. Noah Baumbach's "While We're Young" performed well after expanding from 34 to 246 screens, earning $1.4 million. The comic look at a documentarian in the throes of a mid-life crisis has earned $2.4 million since debuting three weeks ago. The Weinstein Company's "Woman in Gold" also had a big expansion, moving from 258 to 1,504 locations and earning $5.8 million in the process. The drama about a fight to recover art stolen by the Nazis has made north of $9 million in two weeks. Backstage drama "Clouds of Sils Maria" opened to $69,729 on three screens, for a $23,243 per screen average. - Reuters