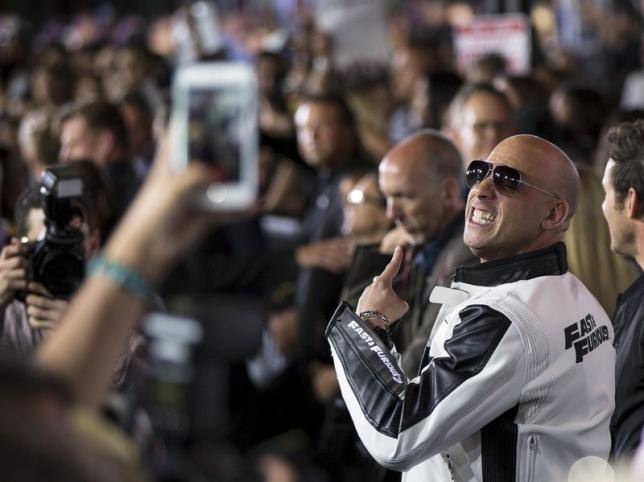 LOS ANGELES - "Furious 7" ran laps around the competition, picking up $29.1 million in its third weekend of release, according to studio estimates. The fast cars and gravity-defying stunts sequel is barrelling towards the $300 million mark stateside having already hurtled past the $1 billion mark globally. Domestically, "Furious 7" has earned $294.4 million. Despite the blockbuster's continued dominance, "Paul Blart: Mall Cop 2" did better than expected, pulling in a solid $24 million across 3,633 locations. It had been projected to fall short of the $20 million barrier. It's good news for Sony Pictures, which had a painful chapter from its recent history dredged up this week when Julian Assange's WikiLeaks published an archive of emails and documents that were stolen by Guardians of Peace. However, "Paul Blart: Mall Cop 2" could not match the $31.8 million debut of the first film in the Blart chronicles. With a modest $30 million production budget, the sequel will be profitable, Sony execs said. "It was a little scary to be in ['Furious 7's'] wake, but that Blart is tough stuff," said Rory Bruer, Sony's distribution chief. "We exceeded expectations and held our ground despite this juggernaut." The film brought back Kevin James as the hapless shopping centre cop, but transplanted the segway shenanigans to Las Vegas. Critics were savage, handing "Paul Blart: Mall Cop 2" a 0% on Rotten Tomatoes. "This movie is about having fun and having some laughs with the whole family and it delivers on that," said Bruer. "If critics don't get that, I guess maybe they needed to see it with an audience or bring their kids." Universal has been racking up big numbers with "Furious 7," but the studio scored another hit with the micro-budget horror film "Unfriended." The look at a bunch of teenagers engaging in some digital age bullying cost a measly $1 million to produce, returning that many times over after one weekend in theatres. "Unfriended" made $16 million across 2,739 theatres. Going into the weekend, the studio had predicted a debut in the $12 million range. And pity poor "Child 44." The Soviet serial killer thriller with Tom Hardy bombed, earning a doleful $600,000 in just 510 theatres. Lionsgate, the studio behind the flop, did sell some foreign territories to mitigate its financial exposure and brought in check-writing partners such as Worldview Entertainment, but with a $50 million price tag, "Child 44" is shaping up to be a pricey disaster. Disney's "The Monkey Kingdom" bowed in seventh place, earning $4.7 million from 2,012 locations. With "Furious 7," "Paul Blart: Mall Cop 2," and "Unfriended" taking up the first three slots, the top five was rounded out by "Home" with $10.3 million and "The Longest Ride" with $6.9 million. "Home" has made $142.6 million since debuting last month, while "The Longest Ride" has lassoed $23.5 million. In limited release, "Ex Machina" expanded from four to 39 screens this weekend, sustaining the highest per screen average in the country for the second week in a row, and adding $814,293 to its haul. The brainy sci-fi film has made $1.1 million. Noah Baumbach's mid-life crisis comedy "While We're Young" made $1.6 million from 713 theatres. It has generated $4.2 million since debuting four weeks ago. - Reuters