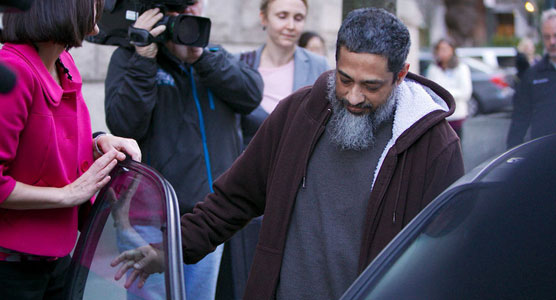 WASHINGTON (Web Desk) - Assistant Attorney General John P. Carlin of the National Security Division and U.S. Attorney S. Amanda Marshall of the District of Oregon announced on Friday that Reaz Qadir Khan, 50, a naturalized U.S. citizen residing in Portland, Oregon, pleaded guilty to the crime of accessory after the fact for providing assistance to individuals connected to the 2009 suicide bomb attack at the headquarters of Pakistan’s intelligence service that killed approximately 30 individuals and injured 300 more, the Federal Bureau of Investigation reported. In his plea entered before U.S. District Court Judge Michael Mosman, Khan admitted to providing advice and financial assistance to suicide bomber Ali Jaleel’s wives after the bombing knowing that such assistance would hinder and prevent the apprehension of Jaleel’s wives and others in the Maldives who may have been involved with Jaleel. On May 27, 2009, Jaleel and two others conducted the suicide attack at the ISI headquarters in Lahore, Pakistan. In a video released by the media outlet of al-Qaeda shortly after the attack, Jaleel made a statement taking responsibility for the attack and was shown preparing for the attack at a training camp in what is believed to be the Federally Administered Tribal Area of Pakistan. In the plea agreement, the defense and government jointly recommended a prison sentence of 87 months. Sentencing is scheduled for June 8, 2015. This case was investigated by the FBI. The prosecution is being handled by Assistant U.S. Attorneys Ethan D. Knight and Charles F. Gorder Jr. of the District of Oregon, with assistance from Trial Attorney David P. Cora of the National Security Division.