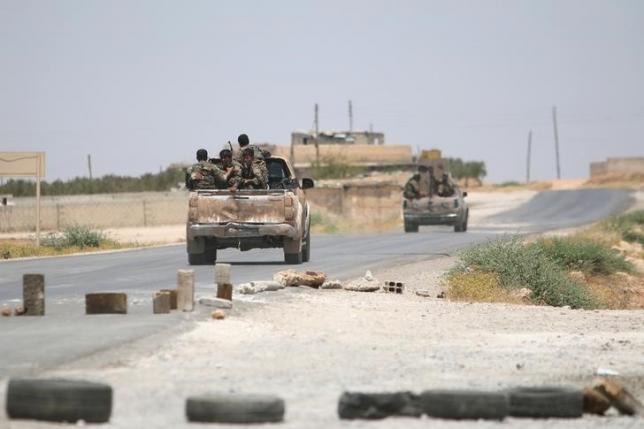 ALEPPO – At least 56 civilians were killed on Tuesday in air strikes north of the besieged Islamic State-held city of Manbij in northern Syria, and residents said they believed the attack was carried out by U.S.-led warplanes, a monitoring group said. The Britain-based Syrian Observatory for Human Rights said the dead included 11 children, and that dozens more people were wounded. The U.S.-backed Syria Democratic Forces (SDF), an alliance of Kurdish and Arab fighters, launched an offensive at the end of May to seize the last territory held by Islamic State (IS) insurgents on Syria's frontier with Turkey. Supported by U.S. coalition air strikes, the SDF has surrounded and fought their way into parts of the city, but Islamic State attacks still occur in some areas of the surrounding countryside. On Monday, 21 people were killed in raids also believed to have been conducted by U.S.-led coalition aircraft on Manbij's northern Hazawneh quarter. In a statement, rights watchdog Amnesty International said the U.S.-led coalition must do more to prevent civilian deaths. "Anyone responsible for violations of international humanitarian law must be brought to justice and victims and their families should receive full reparation," Amnesty's interim Middle East director Magdalena Mughrabi said. Progress into Manbij city has been slow. The militants have deployed snipers, planted mines and prevented civilians from leaving, hampering efforts to bomb the city without causing heavy casualties, according to Kurdish sources. The Observatory said at least 104 civilians have died from air strikes since the start of the Manbij offensive in late May. Syria's main opposition body, the High Negotiations Committee, criticized both the SDF and the coalition, which it blamed for what it said were hundreds of civilian deaths around Manbij. "The lives of Syrian civilians are being lost in their hundreds whilst there is a deafening international silence," it said in a letter addressed to U.N. Secretary General Ban Ki-moon. Some armed opposition groups have been separately fighting the SDF in parts of Aleppo province. Colonel Chris Garver, a spokesman for the U.S. coalition against Islamic State in Syria and Iraq, said it was looking into reports of civilian deaths but was being "extraordinarily careful to make sure" air strikes were killing IS fighters. "Around Manbij, the Syrian Arab Coalition (SAC - Arab groups within the SDF), which is leading that fight, is being very slow and deliberate in that fight to protect civilians which we know are inside." The U.N. High Commissioner for Human Rights recently voiced concern for the roughly 70,000 civilians believed to be trapped between warring parties in Manbij. "Civilians have...reportedly been killed if they leave their homes or attempt to flee. Families are unable to access local cemeteries to bury their relatives who have died or been killed, and are burying them in their gardens or keeping the corpses in bunkers," Zeid Ra'ad Al Hussein said. "The town has no electricity or water at present, and no medical facilities are known to be operating. As the SDF closes in on the city, (Islamic State) has not permitted civilians to leave the area." The coalition said it has conducted more than 450 strikes in the vicinity of Manbij. It routinely investigates civilian deaths and publishes the results of confirmed incidents. Between Sept. 10, 2015 and Feb. 2, 2016, coalition air strikes in Iraq and Syria probably killed 20 civilians and injured 11 others, the U.S. Central Command said in April. On Tuesday, the coalition said the SAC captured an IS command center in western Manbij on Sunday that was concealed in a hospital and was also being used as a logistics hub. The SAC had also taken a significant area of the city during the operation, giving civilians an opportunity to flee, a statement from the Combined Joint Task Force said. –Reuters