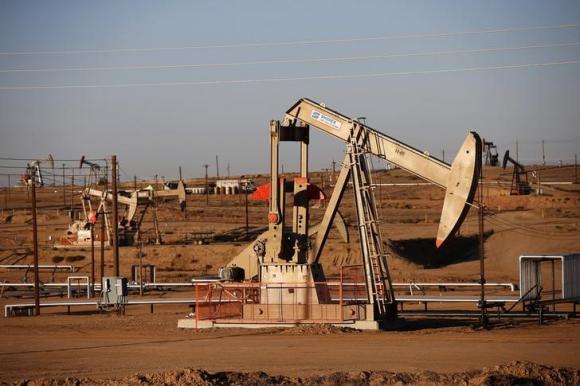 CALIFORNIA - Oil prices will reverse their recent gains as global crude inventories begin to increase again, with US  crude likely to drop as far as $40 a barrel in the near-term, Goldman Sachs(GS.N) said. Oil prices rose by almost a third between January and February on the back of Middle East supply disruptions, strong winter demand and high refinery margins. That followed a rout that had seen price falls of around 60 percent between June 2014 and January this year. But Goldman said that "the activity pull is sequentially weakening" and that global crude inventories would therefore rise, pushing West Texas Intermediate (WTI) crude CLc1 to $40 a barrel, levels last seen at the peak of the global financial crisis in late 2008, early 2009. It stood at around $49.40 on Monday. "While we continue to forecast a strong demand recovery in 2015, we believe that sequentially weaker activity, the end of winter and the end of potential restocking demand, will lead to a sequential deceleration in demand-growth as we enter the spring," the bank said. Goldman said that Brent prices LCOc1 would also come under renewed pressure. "As a result and absent further unexpected OPEC disruptions, we expect Brent oil prices and timespreads to reverse their recent strength, although the lack of a meaningful build in the past few months leaves risk to our forecast for (WTI) oil prices remaining at $40/barrel for two quarters skewed to the upside," the bank said in a note dated March 8. The bank said that it expected "OECD Asia demand to decline in 2015 as stronger industrial production is offset by the continued switch to LNG (liquefied natural gas) for power generation and the impending start-up of the two Sendai nuclear reactors in Japan". A two-thirds drop in Asian LNG prices is making the fuel cost competitive against oil in the industrial power sector. In Japan, the regulator has given approval for several reactors to be restarted this year. All its 48 reactors were taken offline after the meltdowns at the Fukushima Daiichi plant following an earthquake and tsunami in 2011. In the United States, Goldman said that "the build in US  inventories has surprised to the upside, especially in Cushing". The bank said that its WTI price prices forecast of $65 a barrel for 2016 was "skewed to the downside" as currently idled assets could quickly be redeployed, especially as operating costs were falling. –Reuters