US, Cuba meet for second round of normalization talks 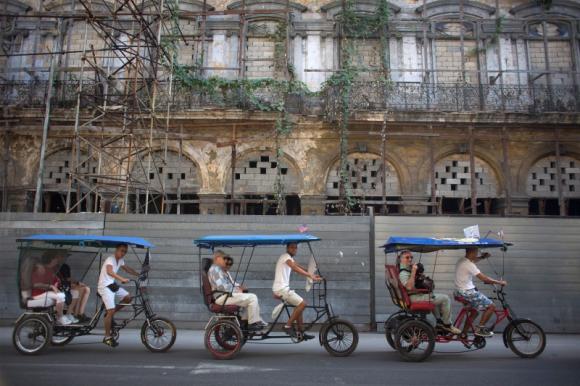 US, Cuba meet for second round of normalization talks

WASHINGTON (Reuters) - Cuban and US officials meet in Washington on Friday for a second round of talks aimed at restoring diplomatic relations, amid friction over Cuba's place on a US list of state sponsors of terrorism. The one-day talks, led by senior diplomats, stem from the decision announced by the two Cold War era foes on Dec. 17 to work to normalize relations, including opening embassies in each other's countries, and to exchange prisoners. Washington severed diplomatic relations with Cuba 54 years ago. Communist-run Cuba is pressing the United States to remove it from its terrorism list before the official restoration of diplomatic ties. It says sanctions on banks that do business with designated countries impede it from conducting diplomatic affairs in the United States. The Obama administration is nearing completion of its review of Cuba's place on the terrorism sponsors list that must be submitted to Congress before Cuba's name can be removed, a senior State Department official told reporters on Wednesday. But re-establishing diplomatic relations should not be tied to the terrorism list, and Cuba's insistence on linking them could delay the opening of embassies, the official suggested. While recognizing the banking problem, US officials say the talks should stick to standard issues regulating embassy functions. Washington is calling for US diplomats to be able to move freely around Cuba and meet who they please, including political dissidents. "Both of us have to come to the table in the spirit of getting to an agreement on these things, and not putting so many obstacles in the way that are not linked directly to how we function as diplomats in each other's countries," the State Department official said. Friday's talks follow a historic first session in Havana last month and US officials cautioned that the tone might well be more workmanlike. The United States is hoping to reach agreement on reopening embassies in time for an April 10-11 regional heads of state summit in Panama, where US President Barack Obama and Cuban President Raul Castro could meet for the first time since announcing their joint agreement last December. The two countries currently conduct business via interests sections in Havana and Washington. Cuba says it has faced US banking problems after it was dropped by its US bank last year and has been unable to find a replacement. Cuba was added to the terrorism sponsors list in 1982, when it aided Marxist insurgencies during the Cold War, but is currently aiding a peace process with Colombia's left wing FARC guerrillas.