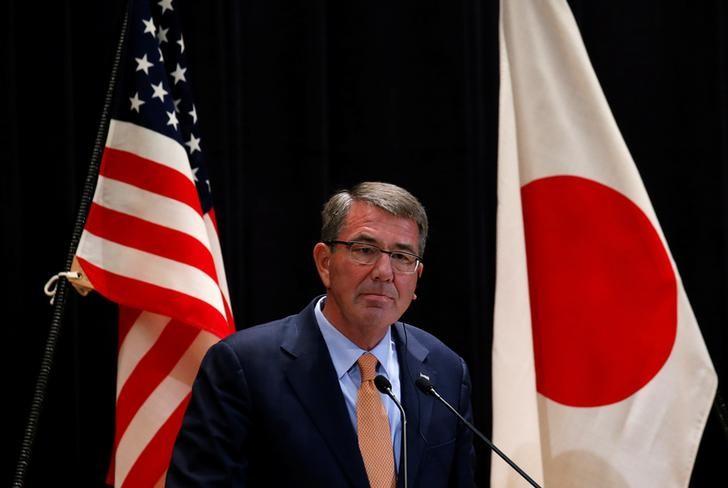 BAGRAM - US Defense Secretary Ash Carter made an unannounced visit to Afghanistan on Friday, amid questions about what President-elect Donald Trump's foreign policy will mean for the country as it faces a renewed Taliban-led insurgency. Carter will meet US troops and Afghan President Ashraf Ghani while in Afghanistan. Trump has given few details on his foreign policy plan, with surprisingly little specifics on Afghanistan, where nearly 10,000 US troops still remain more than 15 years after the Islamist Taliban were toppled by US-backed Afghan forces. Afghanistan was barely mentioned during a bitterly fought election campaign, which largely focused on domestic issues, between Republican Trump and his Democratic rival, former secretary of state Hillary Clinton. Trump, however has said the United States should stop carrying out "nation building". Ghani and Trump spoke by telephone last week, the Trump transition team said in a statement, when they discussed the "terrorism threats facing both countries". One of the most important questions on Afghanistan facing Trump, former officials and experts say, is how many US troops will remain there. Acknowledging that security in Afghanistan remained precarious and Taliban forces had gained ground in some places, President Barack Obama shelved plans to cut the US presence almost in half by year's end, opting instead to keep 8,400 troops there through to the end of his presidency in January. General John Nicholson, the commander of US and international forces in Afghanistan, said last week there was a medium level of risk with the current number of US forces. "My assessment of our current capabilities (is that) we have adequate resources to conduct this mission at a moderate level of risk going forward ... this is acceptable for what we need to conduct," Nicholson told a Pentagon briefing. James Dobbins, a former US special envoy for Afghanistan, said Afghanistan would not factor highly for Trump given the fight against Islamic State militants in Syria and Iraq. This, Dobbins said, was likely to mean that the number of US troops in Afghanistan would remain unchanged, at least in the short term. Trump will inherit a challenging security situation in Afghanistan. A number of provincial capitals have been under pressure from Taliban militants and Afghan forces have been suffering high casualty rates, with more than 5,500 killed in the first eight months of 2016. -Reuters