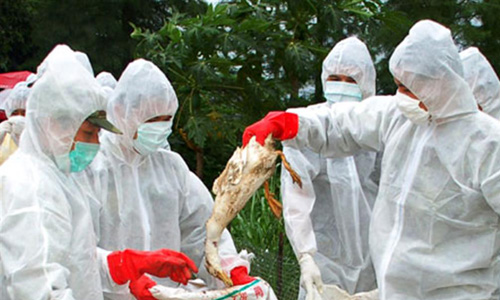 CHICAGO - The US government is developing a vaccine to protect poultry from new strains of avian flu that have recently killed birds from Arkansas to Washington state. Within two months, scientists at a US Department of Agriculture (USDA) research lab in Georgia will test the vaccine on chickens to see how well it prevents them from getting sick and dying of the virus, which the government says is spread by wild birds. Progress toward creating a vaccine has not previously been reported. It comes after the H5N8 and H5N2 flu strains have infected commercial poultry operations and backyard flocks in eight states since December. In response to the cases, key overseas buyers have limited imports of U.S. poultry, and the world's biggest poultry producers, including Tyson Foods Inc and Sanderson Farms Inc, have increased biosecurity at farms. The government has no plans to distribute the vaccine yet, officials said on Monday. Instead, the United States will continue to cull infected flocks and test nearby birds to prevent transmission.
The United States is developing the vaccine in case it needs a countermeasure to the containment strategy, said TJ Myers, associate deputy director of surveillance, preparedness, and response services for the USDA's Animal and Plant Health Inspection Service. The agency will ultimately decide whether to release the vaccine.
The new strains have been found in wild birds that can carry the virus so "there's really no way to predict where the next case might be," Myers said. Vaccinating all poultry nationwide is not considered practical or necessary, he added. Use of a vaccine may be considered if avian flu "gets to the point where we cannot contain it," said Mark Jackwood, head of the University of Georgia's Department of Population Health. Zoetis Inc, the world's largest animal-health company, said it was in contact with USDA about the flu infections. The company has a vaccine approved for use in countries outside the United States. The US Southeast Poultry Research Laboratory, which is working on the new vaccine, tested the effectiveness of an existing vaccine on the new strains. It did not perform as well as scientists wanted, Director David Swayne said. Separately, the U.S. Centers for Disease Control and Prevention is preparing to respond if birds transmit the flu to humans, said Michael Jhung, a medical officer for the influenza division. The risk for human infection is considered low. - Reuters