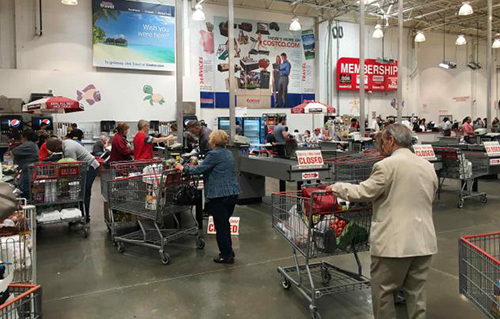 WASHINGTON – US economic growth slowed in the first quarter although not as sharply as initially thought, as a surge in home building and steady inventory accumulation partially offset the drag from a steep decline in business investment. Gross domestic product rose at a 0.8 percent annual rate as opposed to the 0.5 percent pace reported last month, the Commerce Department said on Friday in its second GDP estimate for the January-March period. That was the weakest growth since the first quarter of 2015. The economy grew at a rate of 1.4 percent in the fourth quarter. But a sharp upward revision to income growth and a rebound in corporate profits in the first quarter brightened the picture. When measured from the income side, the economy grew at a 2.2 percent rate after expanding at a 1.9 percent pace in the fourth quarter. Economists said strong income growth, together with signs the economy was picking up steam in the second quarter, could give the Federal Reserve the ammunition to raise interest rates as early as next month. The US central bank increased rates in December for the first time in nearly a decade. "This gives us more confidence that growth will hit its marks in the second quarter ... enough forward speed for the Fed to continue with its gradual pace of rate hikes," said Chris Rupkey, chief economist at MUFG Union Bank in New York. Minutes from the Fed's April 26-27 policy meeting, published last week, showed most of its policymakers considered it appropriate to raise rates in June if data continued to point to an improvement in second-quarter growth. Similar sentiments were echoed by Fed Chair Janet Yellen, who said on Friday the U.S. central bank could hike rates "in the coming months," if the economy and the labor market continued to improve. The Fed raised its benchmark overnight interest rate in December for the first time in nearly a decade. The dollar .DXY rose to a two-month high against a basket of currencies, while prices for US Treasuries fell. US stocks were trading higher. The upward revision to first-quarter GDP growth also reflected a modest hit from trade than previously estimated. The economy has been hurt by a strong dollar and sluggish global demand, which have eroded export growth. It has also been squeezed by lower oil prices, which have undercut profits of oilfield companies like Schlumberger (SLB.N) and Halliburton (HAL.N), forcing them to slash spending on equipment. Economists also believe the model used by the government to strip out seasonal patterns from data is not fully accomplishing its goal despite steps last year to address the problem. The economy has underperformed in the first quarter in five of the last six years. REGAINING MOMENTUM The economy appears to have regained momentum early in the second quarter, with retail sales, goods exports, industrial production, housing starts and home sales surging in April. A report on Friday showed consumer sentiment holding at lofty levels in May, with households' attitudes towards vehicle and home purchases improving. The Atlanta Federal Reserve is currently estimating second-quarter GDP rising at a 2.9 percent rate. Spending on residential construction increased at a 17.1 percent rate in the first quarter, the fastest pace since the fourth quarter of 2012. It was previously reported to have risen at a rate of 14.8 percent. Residential construction added 0.56 percentage point to first-quarter GDP growth, up from the 0.49 percentage point reported last month. Businesses accumulated $69.6 billion worth of inventory, instead of the $60.9 billion estimated last month. Inventories cut two-tenths of a percentage point from GDP growth instead of the previously reported 0.33 percentage point. There was no revision to consumer spending, which accounts for more than two-thirds of U.S. economic activity. Spending increased at a pace of 1.9 percent, a slowdown from the fourth quarter's 2.4 percent rate. Households were frugal in the first quarter, cutting back on purchases of long-lasting manufactured goods like automobiles. Income at the disposal of households after accounting fortaxes and inflation was revised up to show it jumping at a 4.0 percent rate in the first quarter instead of the previously reported 2.9 percent. Savings were revised up to $782.6 billion from $712.3 billion. "The softish real consumer spending in the last couple of quarters is probably temporary and spending is likely to rebound in the second quarter, reflecting continued solid income formation," said Kevin Cummins, senior economist at RBS in Stamford, Connecticut. After-tax corporate profits increased at a 0.6 percent rate in the first quarter after plunging at an 8.4 percent pace in the fourth quarter, when they were held down in part by a $20.8 billion transfer payment related to the BP (BP.L) oil spill in the Gulf of Mexico in 2010. Exports were not as weak as initially thought. That, together with a decline in imports, produced a smaller trade deficit, which subtracted 0.21 percentage point from first-quarter GDP growth instead of the 0.34 percentage point reported last month. A sustained plunge in energy sector investment undercutbusiness spending. Equipment spending tumbled at a steeper 9.0 percent rate, the fastest pace of decline since the second quarter of 2009. It was previously reported to have dropped at a rate of 8.6 percent. Spending on equipment will likely remain weak in the second quarter, with a report on Thursday showing orders for manufactured capital goods excluding aircraft and defense declined in April for a third straight month. –REUTERS