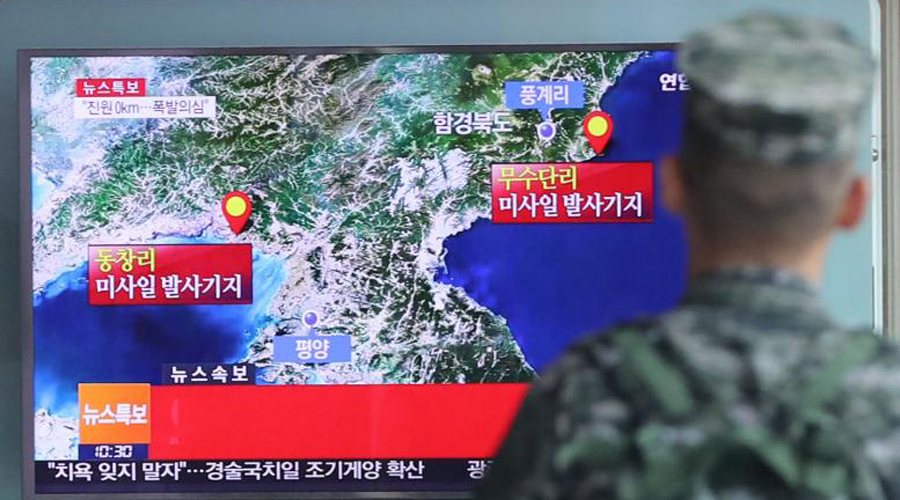 TOKYO - The United States may take unilateral action against North Korea, a US special envoy for the isolated state said on Sunday, two days after it carried out its fifth and biggest nuclear test, in defiance of UN sanctions. "North Korea continues to present a growing threat to the region, to our allies, to ourselves. And we will do everything possible to defend against that growing threat. In addition to action in the security council, both US and Japan, together with the ROK (Republic of Korea) will be looking at any unilateral measures as well as bilateral measures as well as possible trilateral cooperation in response to the provocative and unacceptable behaviour by the North Koreans," said Sung Kim, the envoy. Speaking to reporters in Tokyo after meeting senior Japanese foreign ministry officials including his counterpart Kenji Kanasugi, Kim said there were no detailed measures to be announced yet, but they hope to do soon. "I think the previous Security Council resolutions made clear that if North Korea continues to violate obligations under the Security Council then the Security Council will have to take further significant action and that is the situation we find ourselves in. So there is a strong commitment in the Security Council that we must come up with a strong as possible response as quickly as possible. We are just getting started with that process, so I think its difficult to predict the exact timeline at this juncture," he said. South Korea said that North Korea's nuclear capability is expanding fast, echoing alarm around the world over the isolated state's fifth and biggest nuclear test, carried out in defiance of UN sanctions. North Korea conducted the test on Friday and said it had mastered the ability to mount a warhead on a ballistic missile, ratcheting up a threat that rivals and the United Nations have been powerless to contain. The test showed North Korean leader Kim Jong Un was unwilling to alter course, and that tougher sanctions and pressure were needed to apply "unbearable pain on the North to leave no choice but to change", South Korean Foreign Minister Yun Byung-se said. "North Korea's nuclear capability is growing and speeding to a considerable level, considering the fifth nuclear test was the strongest in scale and the interval has quickened substantially," Yun told a ministry meeting convened to discuss the test. The blast, on the 68th anniversary of North Korea's founding, drew global condemnation. The United States said it would work with partners to impose new sanctions, and called on China to use its influence - as North Korea's main ally - to pressure Pyongyang to end its nuclear programme. In Beijing on Saturday, Chinese Vice Foreign Minister Zhang Yesui told North Korea's ambassador to China, Ji Jae Ryong, that the test was "not conducive to the peace and stability of the Korean peninsula", China's Foreign Ministry said. "China urges North Korea not to take any more actions that could exacerbate tensions, and return as soon as possible to the correct direction of denuclearisation," Zhang said. But Russia was sceptical that more sanctions were the answer, while China was silent on the prospect of a new U.N. Security Council resolution, although state media did carry commentaries criticising the North. Under 32-year-old leader Kim, North Korea has sped up development of its nuclear and missile programmes, despite U.N. sanctions that were tightened in March and have further isolated the impoverished country. -Reuters