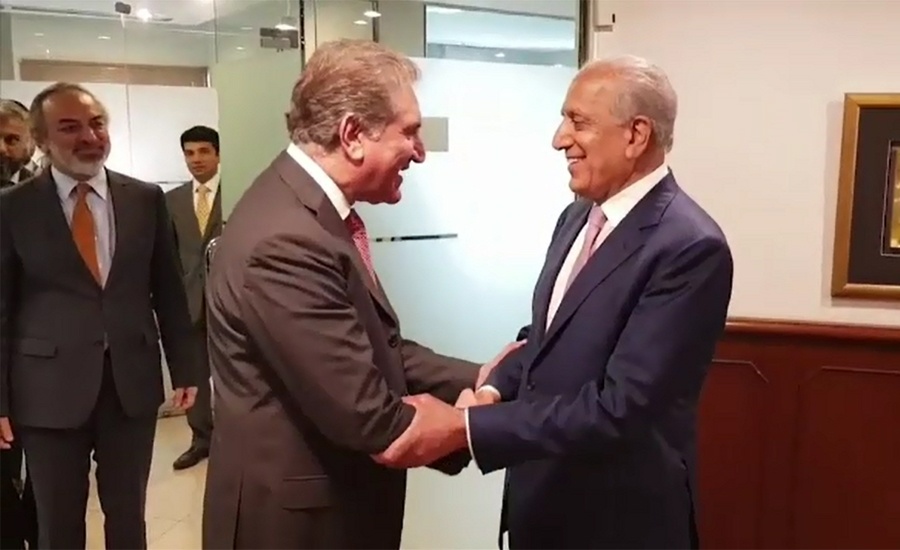 ISLAMABAD (92 News) – US Special Representative for Afghanistan Reconciliation Zalmay Khalilzad on Thursday reached Islamabad on a brief visit to Pakistan. He also held a meeting with Foreign Minister Shah Mahmood Qureshi at Foreign Ministry. During the meeting, he shared the outcomes following 7th round of US-Taliban peace talks in Doha and his recent engagements in Kabul. The foreign minister welcomed the progress achieved in the talks and the Intra Afghan Peace Conference in Doha in which all participants agreed upon a basic roadmap. It was noted that ultimately the intra-Afghan dialogue would be vital to reach an agreement where Afghanistan becomes a stable, peaceful and prosperous country. It was also stressed that taking the Afghan peace process forward remained a shared responsibility. Pakistan will continue to play its supportive role for smooth progress and successful outcome of these peace efforts. The US envoy will hold important meetings with the civil and military leadership to apprise them on the progress in the Afghan peace process. Zalmay Khalilzad will depart for Qatar in the evening after meeting with Foreign Minister Shah Mahmood Qureshi at the Foreign Office. It is pertinent to mention here that the visit of US envoy to Pakistan is being considered key important, as he will later proceed to Qatar to hold talks with the Taliban and try to remove differences over certain complicated issues including differences over a timeframe for the withdrawal of foreign forces. On July 30, Foreign Minister Shah Mahmood Qureshi has said Pakistan is not a guarantor but only facilitator in the Afghan peace process. He said the entire onus of the Afghan peace process cannot be put on Pakistan. He said Pakistan maintains that it is the shared responsibility of all the stakeholders to take forward the peace process. FM Qureshi said that Prime Minister Imran Khan wants to have a meeting with the Taliban to woo them for the intra Afghan dialogue. He said Pakistan is moving forward in good faith. The minister said convergence was seen on Afghan issue during a meeting between Prime Minister Imran Khan and the US President Donald Trump. “This has opened a new chapter in Pakistan-US relations,” he added. He said the US visit remained very successful in achieving the objectives and this stands also reflected in the restoration of suspended assistance. Earlier, US Special Representative for Afghan Reconciliation Zalmay Khalilzad and Principal Deputy Assistant Secretary of State, South and Central Asia, Alice G Wells held the delegation level talks at the Ministry of Foreign Affairs. The Pakistan side consisted of inter-agency delegation led by Aftab Khokhar, Additional Secretary (Americas). The two sides discussed bilateral relations and the Afghan reconciliation process.