US factory orders rebound on strong demand for aircraft 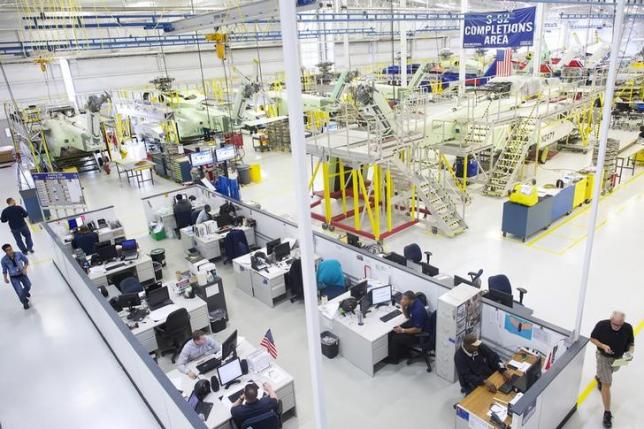 US factory orders rebound on strong demand for aircraft

WASHINGTON - New orders for US factory goods rebounded strongly in June on robust demand for transportation equipment and other goods, a hopeful sign for the struggling manufacturing sector. The Commerce Department said on Tuesday new orders for manufactured goods increased 1.8 percent after declining 1.1 percent in May. "We are moving past the very weak period for the manufacturing sector from early on this year, but that activity has yet to meaningfully increase," said Daniel Silver, an economist at JPMorgan in New York. Factory activity has been stymied by a strong dollar and spending cuts in the energy sector after last year's sharp plunge in crude oil prices. Tepid global demand also has weighed on manufacturing, which accounts for about 12 percent of the domestic economy. Those factors have eroded the profits of multinational companies like Caterpillar Inc (CAT.N), Procter & Gamble Co (PG.N), the world's largest household products maker, and Whirlpool Corp (WHR.N), the global home appliances giant. Though there are signs that the energy spending drag is easing, the dollar's strength will likely remain a constraint. The dollar has gained 15 percent against the currencies of the United States' main trading partners since June 2014. Stocks on Wall Street were little changed, while prices for US government debt fell. The dollar was largely flat against a basket of currencies. Orders for transportation equipment surged 9.3 percent in June, reflecting a 65.4 percent jump in aircraft bookings. There were increases in orders for machinery, furniture, fabricated metal products, electrical equipment, appliances and components. SOLID INVENTORIES The Commerce Department also said orders for non-defense capital goods excluding aircraft - seen as a measure of business confidence and spending plans – increased 0.7 percent instead of the 0.9 percent rise reported last month. Shipments of these so-called core capital goods, which are used to calculate business equipment spending in the gross domestic product report, increased 0.3 percent in June. Shipments were previously reported to have dipped 0.1 percent. Manufacturing inventories increased a solid 0.6 percent, which was more than the government assumed in its second-quarter GDP snapshot published last week. Coming on the heels of a report on Monday showing stronger construction spending in May and April than previously reported, economists said the sturdy increase in factory inventories suggested that second-quarter GDP could be revised to as high as a 3 percent annual pace. The Commerce Department reported last Thursday that the economy expanded at a 2.3 percent pace in the second quarter. It will publish its second GDP estimate for that quarter later this month. In the wake of the construction data, economists had said they expected second-quarter growth would be raised by at least four-tenths of a percentage point to a 2.7 percent pace. They forecast factory inventories adding another 0.3 percentage point. But with the inventories-to-shipments ratio at a lofty 1.35, compared to 1.30 last September, manufacturers might be sitting on a pile of unwanted goods, which could hurt production and weigh on growth in the coming quarters. "It also highlights the probability that an unwinding of this stockpiling will almost assuredly result in a drag on GDP growth in the second half of the year," Tim Quinlin, an economist at Wells Fargo Securities in Charlotte, North Carolina. - REUTERS