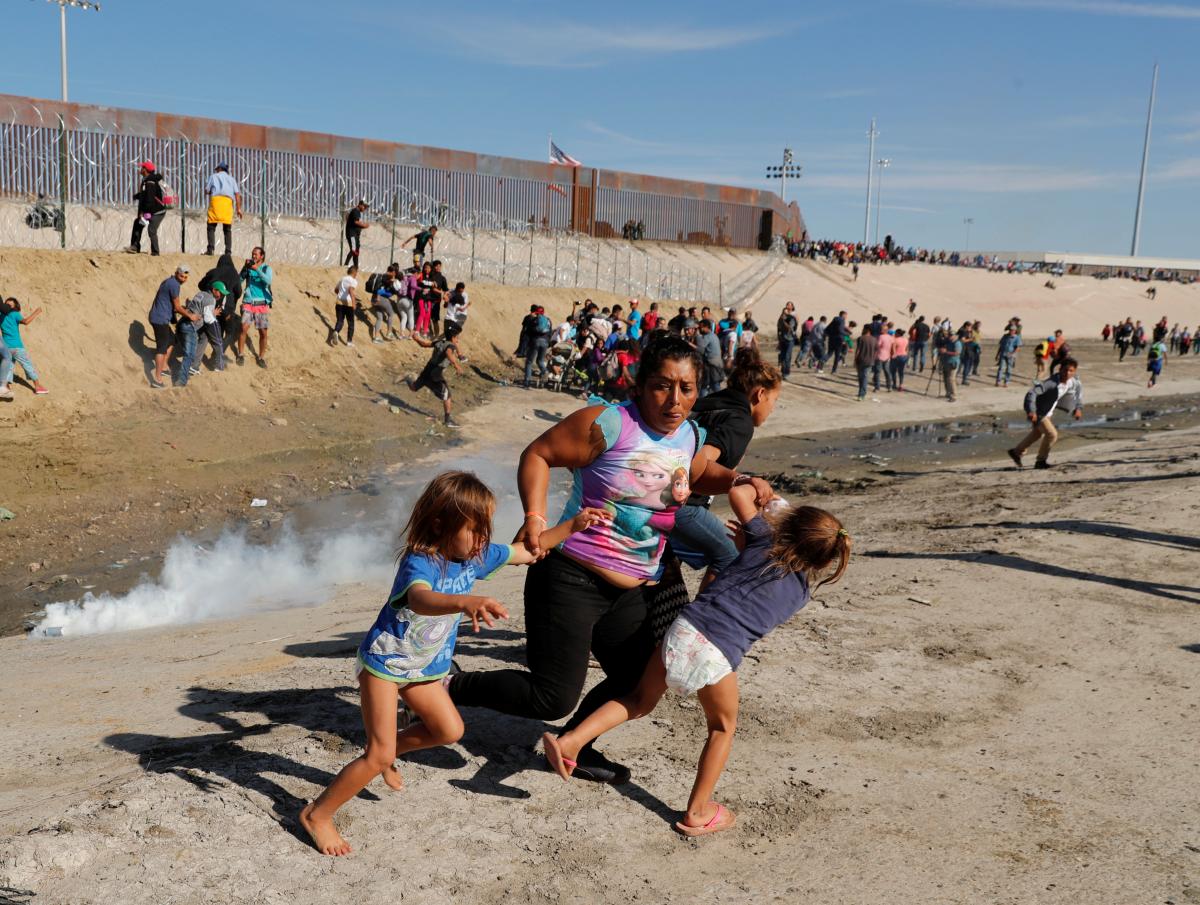 TIJUANA, Mexico (Reuters) - US authorities shut the country’s busiest border crossing and fired tear gas into Mexico on Sunday to repel Central American migrants approaching the border after US President Donald Trump vowed the asylum-seekers would not easily enter the country. Traffic in both directions was suspended for several hours at the San Ysidro port of entry between San Diego and Tijuana, US officials said, disrupting trade at the most heavily trafficked land border in the Western Hemisphere. Pedestrian crossings and vehicle traffic later resumed, officials said. Tensions on the border had been rising in recent days, with thousands of Central American migrants who arrived in a caravan camped out in a sports stadium in Tijuana. On Sunday, Mexican police broke up the latest in a series of daily protests, triggering a rush toward the US border. US Customs and Border Protection officers stopped the migrants with a volley of canisters emitting large clouds of gas as U.S. and Mexican government helicopters clattered overhead. The Mexican government said it had retaken control of the border crossing after nearly 500 migrants tried to cross the US border “in a violent manner,” and vowed to immediately deport Central Americans who attempt to enter the United States illegally. Trump has raised alarm for weeks about the caravan of Central American migrants as it approached the United States, with its members planning to apply for asylum on reaching the country. The mostly Honduran migrants are fleeing poverty and violence and have said they would wait in Tijuana until they could request asylum in the United States, despite growing U.S. measures to tighten the border. Hundreds of caravan members including women and children protested peacefully on Sunday with chants of “We aren’t criminals! We are hard workers.” As they neared the U.S. border, they were stopped by Mexican authorities, who told them to wait for permission. As the morning wore on, and it became clear they would not get permission, people started to express frustration.

Groups of migrants, some of them bearing the Honduran flag, broke off and headed toward the border fence, where U.S. Customs and Border Protection officers gathered on the other side, backed by U.S. military police, San Diego police and the California Highway Patrol. The Americans responded with tear gas after the migrants hit them with projectiles, U.S. Customs and Border Protection said on Twitter. “Border Patrol agents deployed tear gas to dispel the group because of the risk to agents’ safety,” the statement said. Protesters were caught between the Mexican and U.S. authorities. A young woman fell to the ground unconscious, and two babies cried, tears streaming from the gas, a Reuters witness said. “They want us to wait in Mexico but I for one am desperate. My little girl is sick and I don’t even have money for milk,” said Joseph Garcia, 32, of Honduras. “I can’t stand it anymore.” Trump has deployed military forces to the border to support the Border Patrol and threatened on Saturday to close the entire southern border. Military police were sent to the border crossing and military engineers moved barricades as part of the enforcement, the US Northern Command said in a statement on Sunday. “Department of Defense military personnel will not be conducting law enforcement functions, but are authorized to provide force protection for Customs and Border Protection personnel,” the statement said. An average of 70,000 vehicles and 20,000 pedestrians cross from Mexico to the United States at San Ysidro each day, according to the U.S. General Services Administration. Duncan Wood, director of the Mexico Institute at the Wilson Center research group in Washington, called the closure a “drastic response” and said it would cost “many millions of dollars.” U.S. and Mexican negotiators met on Sunday to discuss a plan to keep the Central Americans in Mexico while their asylum claims are heard. Normally, asylum-seekers announce their intention on arriving at U.S. ports of entry or after crossing the border illegally. Trump has been pushing for a U.S.-Mexico border wall and warned on Thursday there could be a government shutdown next month if the U.S. Congress failed to provide funding. Sunday’s events took place at one of the stretches where there is a physical border barrier.