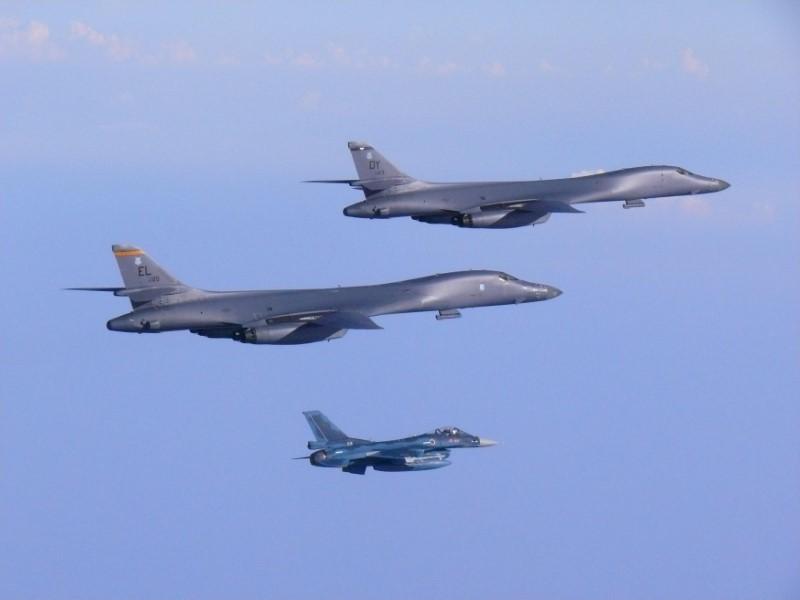 SEOUL - The United States flew two supersonic B-1B bombers over the Korean peninsula in a show of force on Sunday after Pyongyang's recent tests of intercontinental ballistic missiles (ICBM), the US and South Korean Air Forces said. North Korea said it conducted another successful test of an intercontinental ballistic missile (ICBM) on Friday that proved its ability to strike America's mainland, drawing a sharp warning from US President Donald Trump. The B-1B flight was in direct response to the missile test and the previous July 3 launch of the "Hwansong-14" rocket, the US statement said. The South Korean air force said the flight was conducted early on Sunday. The bombers took off from a US air base in Guam, and were joined by Japanese and South Korean fighter jets during the exercise, according to the statement. "North Korea remains the most urgent threat to regional stability," Pacific Air Forces commander General Terrence J. O'Shaughnessy said in the statement. "If called upon, we are ready to respond with rapid, lethal, and overwhelming force at a time and place of our choosing". The US has in the past used overflights of the supersonic B1-B "Lancer" bomber as a show of force in response to North Korean missile or nuclear tests. North Korean leader Kim Jong Un personally supervised the midnight test launch of the missile on Friday night and said it was a "stern warning" for the United States that it would not be safe from destruction if it tries to attack, the North's official KCNA news agency said. North Korea's state television broadcast pictures of the launch, showing the missile lifting off in a fiery blast in darkness and Kim cheering with military aides. China, the North's main ally, said it opposed North Korea's missile launches, which it said violate United Nations Security Council resolutions designed to curb Pyongyang's banned nuclear and missile programmes. "At the same time, China hopes all parties act with caution, to prevent tensions from continuing to escalate," China's foreign ministry said in a statement on Saturday. Trump "Very Disappointed in China" However, Trump said he was "very disappointed in China". In a message on Twitter, he said: "Our foolish past leaders have allowed them to make hundreds of billions of dollars a year in trade, yet..." "...they do NOTHING for us with North Korea, just talk. We will no longer allow this to continue. China could easily solve this problem!" he said in a subsequent tweet. The Hwasong-14, named after the Korean word for Mars, reached an altitude of 3,724.9 km (2,314.6 miles) and flew 998 km (620 miles)for 47 minutes and 12 seconds before landing in the waters off the Korean peninsula's east coast, KCNA said. Western experts said calculations based on that flight data and estimates from the US, Japanese and South Korean militaries showed the missile could have been capable of going as far into the United States as Denver and Chicago. David Wright of the US-based Union of Concerned Scientists wrote in a blog post that if it had flown on a standard trajectory, the missile would have had a range of 10,400 km (6,500 miles). North Korea said on Sunday it had been forced to develop long-range missiles and nuclear weapons because of hostile intent by "American imperialist beasts" looking for another chance to invade the country. "In case the US fails to come to its own senses and continues to resort to military adventure and 'tough sanctions', the DPRK will respond with its resolute act of justice as already declared," its foreign ministry said in a statement. DPRK is short for the North's formal name, the Democratic People's Republic of Korea. It did not specify what action it would take. The missile test came a day after the US Senate approved a package of sanctions on North Korea, Russia and Iran. The foreign ministers of South Korea, Japan and the United States agreed to step up pressure on Pyongyang and to push for a stronger U.N. Security Council sanctions resolution. -Reuters