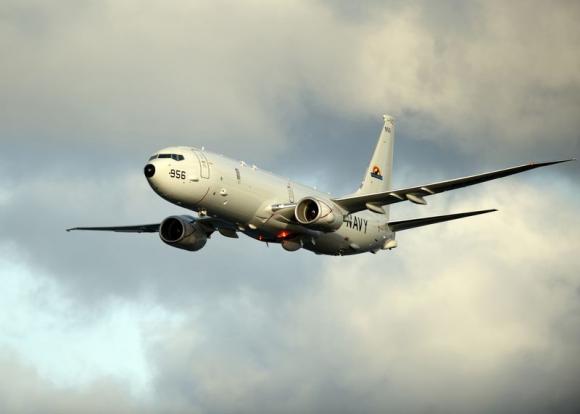 MANILA (Reuters) - The United States has begun flying its most advanced surveillance aircraft, the P-8A Poseidon, out of the Philippines for patrols over the South China Sea, the US Navy said on Thursday, acknowledging the flights for the first time. The United States, the Philippines' oldest and closest ally, has promised to share "real time" information on what is happening in Philippine waters as China steps up its activities in the South China Sea. China claims most of the potentially energy-rich South China Sea, through which $5 trillion in ship-borne trade passes every year. The Philippines, Vietnam, Malaysia, Brunei and Taiwan also have overlapping claims. The US Navy said in a statement it demonstrated the capabilities of P-8A in both littoral and open ocean environments, explaining the aircraft's multi-mission sensors to Philippine forces. "It was a remarkable opportunity to work alongside the members of the Filipino armed forces," said US Navy Lieutenant Matthew Pool, Combat Air Crew 4 patrol plane commander. "Sharing this aircraft's capabilities with our allies only strengthens our bonds." The United States says it does not take sides in disputes between China and other SouthChina Sea claimants and it calls on them to negotiate a formal maritime Code of Conduct. The Unites States has also called for a freeze on provocative acts in the sea but China rejects US involvement in the dispute. China accuses the United States of emboldening claimants such as the Philippines and Vietnam with its military "pivot" back to Asia. The P-8A was deployed in the Philippines for three weeks until Feb. 21, making more than 180 flight hours over the South China Sea, the US Navy said. Colonel Restituto Padilla, a spokesman for the Philippine armed forces, said the US Navy has been operating P-3C Orions since 2012 from Philippine bases under a bilateral security agreement that sees US forces rotate through the Philippines. He said P-8A aircraft replaced the Orions on the rotations last year but the allies had made no announcement of its flights. "We expect more surveillance planes to be deployed in the Philippines, increasing the frequency of rotation," Padilla said.