US government says 8.84 million people signed on for 2015 Obamacare plans 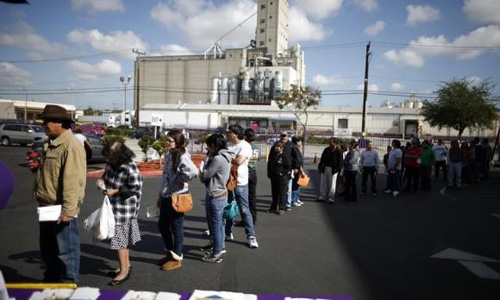 US government says 8.84 million people signed on for 2015 Obamacare plans

CALIFORNIA (Reuters) - Some 8.84 million people selected or were automatically enrolled as of Feb. 22 in an individual health insurance plan on the HealthCare.gov website created under the national healthcare reform law, the US government health agency said on Wednesday. The US Department of Health and Human Services extended enrollment for people who had tried to buy an insurance plan on or before Feb. 15 but were unable to because of customer lines at the call center or technical issues. Some 40,714 people picked a plan after enrollment closed on Feb. 15. HealthCare.gov, created under the healthcare reform law often called Obamacare, sells plans in 37 states. The other states and Washington D.C. operate their own online exchanges. The US agency said that 90,000 consumers who had coverage in 2014 were not able to hold onto that coverage in 2015 because they lacked citizenship or immigration status documents, down from a previous estimate of 200,000 people. It said the figure is included in the total of 8,838,291 million plan selections. The enrollment period for 2015 coverage opened on Nov. 15 and closed on Feb. 15.