US health official says no fix if Obamacare subsidies thrown out 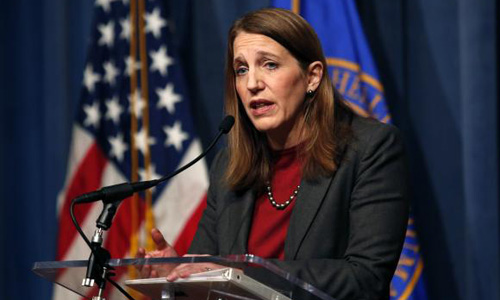 US health official says no fix if Obamacare subsidies thrown out

NEW YORK (Reuters) - The Obama administration has no way to repair the damage that would result from a Supreme Court decision against Obamacare that would make health care unaffordable for millions of Americans, a top health adviser said on Tuesday. The Supreme Court is expected to rule by the end of June on whether residents in at least 34 US states are eligible for federal tax subsidies to help them buy health coverage under President Barack Obama's Affordable Care Act. Oral arguments are scheduled for March 4. Conservative plaintiffs argue that the federal funds cannot pay for insurance in states that did not create their own health insurance exchanges and instead rely on the administration's HealthCare.gov website. "We know of no administrative actions that could, and therefore we have no plans that would, undo the massive damage to our health care system that would be caused by an adverse decision," US Health and Human Services Secretary Sylvia Burwell wrote in a letter to Republican Senator Orrin Hatch. Hatch has pressed Burwell for an answer on how the government would respond to a negative court ruling. The government said last week that nearly 11.4 million people had purchased health insurance through HealthCare.gov and through 14 exchanges run by individual states and the District of Columbia. If the high court decides the subsidies are invalid, Burwell wrote, insurance would become unaffordable for millions of people, healthy people would be less likely to purchase insurance and Obamacare would no longer work in states with federal exchanges, driving up insurance costs. Until now, Burwell had refrained from commenting on the consequences of the case, King v. Burwell, which challenges wording in the 2010 law that says insurance would be provided through exchanges "provided by the state." Some Republican lawmakers say a Supreme Court ruling against the subsidies would allow them to replace Obamacare with their own healthcare reforms. "By admitting they have no contingency plan to assist the millions that may lose subsidies, the administration confirms how the misguided law is unworkable for the American people," said Hatch, chairman of the Senate Finance Committee, in a statement. "I’m committed to working with my Republican colleagues on how Congress can respond to help those hurt by Obamacare’s broken promises," he said.