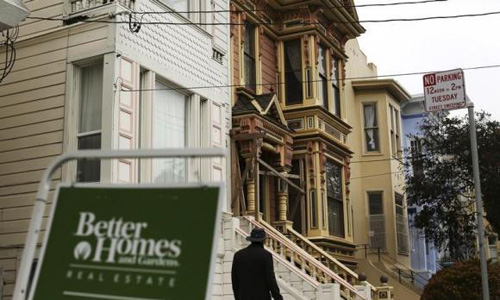 NEW YORK (Reuters) - US home prices rose again in December and activity in the services sector expanded in February at its fastest pace since October, but a gauge of consumer confidence fell, according to reports published on Tuesday. Federal Reserve chairman Janet Yellen also noted on Tuesday that the slowly improving US economy may lead to a rise in interest rates later this year in testimony she gave to Congress. US single-family home prices rose in December, led by strong increases in the western half of the United States, a closely watched survey said. The S&P/Case Shiller composite index of 20 metropolitan areas gained 4.5 percent in December from the prior year. This was above a Reuters poll of economists that forecast a rise of 4.3 percent, as well as the 4.3 percent growth rate in November. "While prices and sales of existing homes are close to normal, construction and new home sales remain weak," David Blitzer, chairman of the index committee at S&P Dow Jones Indices, said in a statement. "The softness in housing is despite favorable conditions elsewhere in the economy: strong job growth, a declining unemployment rate, continued low interest rates and positive consumer confidence." However, Toll Brothers Inc (TOL.N), the largest US luxury homebuilder, reported a higher-than-expected quarterly profit on Tuesday and raised the low end of its full-year home delivery forecast. The company now expects to deliver 5,200 to 6,000 homes in 2015 at an average price of $725,000-$760,000. It had earlier forecast deliveries of 5,000 to 6,000 homes at $710,000-$760,000. "More jobs and better jobs should boost household formations and provide a basis for stronger housing demand," Executive Chairman Robert Toll said. US construction on new homes rose 18.7 percent to a 1.07 million-unit annual pace in January, compared with a year earlier, the Commerce Department's data showed last week. Home Depot Inc (HD.N), the world's No. 1 home improvement chain, also posted a better-than-expected rise in quarterly same-store sales on Tuesday, but the company warned a strong US dollar will likely hurt 2015 earnings. US homebuilders remain upbeat about market conditions, according to a survey by the National Association of Home Builders published last week. However, US consumer confidence fell more than expected in February, pulling back from a multi-year high according to a private sector report released on Tuesday. The Conference Board, an industry group, said its index ofconsumer attitudes fell to 96.4, the lowest since September, from an upwardly revised 103.8 in January.. A recent increase in gasoline costs from a six-year low may be curbing the enthusiasm of some households after a plunge in prices last year and a pickup in hiring helped confidence surge. A gallon of regular gasoline cost an average $2.31 on Feb. 23 according to the US Energy Information Agency. While that is still below last year's peak of $3.70, it is up from an almost six-year low of $2.03 in January. In other data, the US services sector expanded in February at its fastest pace since October, with businesses reporting more orders because of improving economic conditions. Financial data firm Markit said its preliminary, or "flash," reading of its Purchasing Managers Index for the service sector rose to 57.0 in February from 54.2 in January. The report far outpaced forecasts in a Reuters survey for a February reading of 54.0. A reading over 50 signals expansion in economic activity. “While parts of the East Coast have struggled in the face of adverse weather, other regions basked in unusually warm temperatures, boosting business above seasonal norms," said Chris Williamson, chief economist at Markit, in a statement. "Activity levels surged higher and inflows of new business boomed as a result." Markit last week said its flash US Manufacturing Purchasing Managers Index rose to 54.3 in February from January's 53.9. “Alongside the upturn signaled by the sister ‘flash’ manufacturing PMI survey, the improved performance of the service sector in February means the economy looks to be enjoying yet another spell of robust growth in the first quarter," Williamson said. US stocks advanced modestly on Tuesday, with the Dow and S&P 500 at intraday records, as investors attempted to interpret testimony by Federal Reserve Chair Janet Yellen on the state of the economy and possible future interest rate rises.