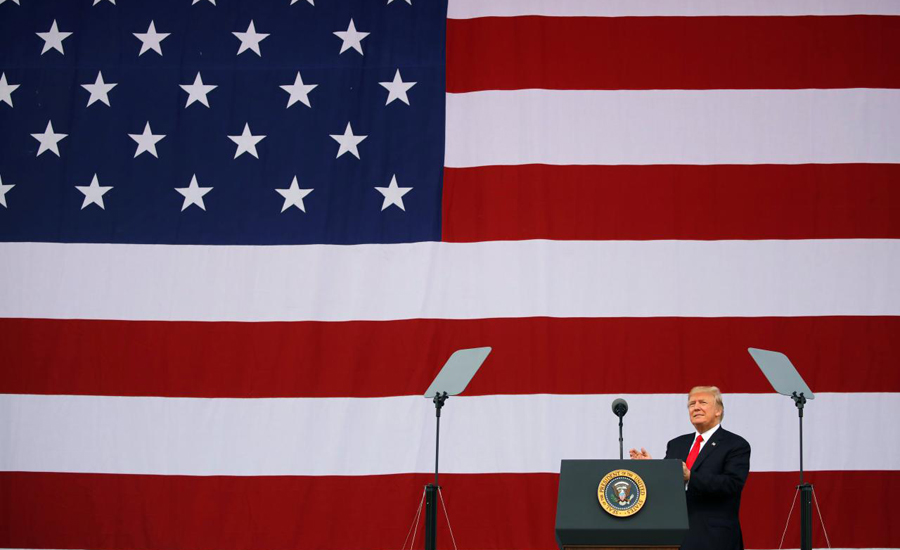 WASHINGTON - The US House of Representatives voted overwhelmingly to slap new sanctions on Russia and force President Donald Trump to obtain lawmakers' permission before easing any sanctions on Moscow, in a rare rebuke of the Republican president. It was unclear how quickly the bill would make its way to the White House for Trump to sign into law or veto. The bill still must be passed by the Senate, which is mired in debate over efforts to overhaul the US healthcare system as lawmakers try to clear the decks to leave Washington for their summer recess. The sanctions bill comes as lawmakers investigate possible meddling by Russia in the 2016 presidential election and potential collusion by Republican Trump's campaign. Moscow has denied it worked to influence the election in Trump's favour, and he has denied his campaign colluded. The White House said the president had not yet decided whether he would sign the measure. Rejecting the bill - which would potentially hamper his hopes of pursuing improved relations with Moscow - would carry a risk that his veto could be overridden by lawmakers. "While the president supports tough sanctions on North Korea, Iran and Russia, the White House is reviewing the House legislation and awaits a final legislative package for the president’s desk," said spokeswoman Sarah Sanders. House members backed the bill, which also imposes sanctions on Iran and North Korea, by a near-unanimous margin of 419-3, with strong support from Trump's fellow Republicans as well as Democrats, despite objections from Trump, who wanted more control over the ability to impose sanctions. The Republican-controlled Senate passed an earlier version of the bill with near-unanimous support. The House added the North Korea measures after becoming frustrated with the Senate's failure to advance a bill it passed in May. Representative Ed Royce, the Republican chairman of the House Foreign Affairs Committee, said the three countries “are threatening vital US interests and destabilising their neighbours. It is well past time that we forcefully respond.” But the combined bill has run into objections from some senators, who are unhappy that the House added the North Korea sanctions after holding up the measure for more than a month. Senate leaders have not said when they might consider the House bill. Senator Bob Corker, the Republican chairman of the Senate Foreign Relations Committee, said he was not sure the bill would "fly through" his chamber. "The only language we agreed to was Iran and Russia. So adding North Korea on, I just don’t know how we’re going to deal with it yet," Corker told reporters. "The better route would have been to send over what had been agreed to." The bill had raised concerns in the European Union, where US allies depend on supplies of Russian gas. But House members said the bill was tweaked to try to alleviate the worries of Europeans and the energy sector. Investigations The intense focus on Russia, involving several congressional probes and a separate investigation by a Justice Department-appointed special counsel, Robert Mueller, has overshadowed Trump's agenda. The scrutiny has angered and frustrated the president, who calls the investigations a politically motivated witch hunt fuelled by Democrats who cannot accept his upset win in last November's election against Democratic candidate Hillary Clinton, a former US secretary of state. Without offering evidence, Trump lashed out on Twitter on Tuesday about "Ukrainian efforts to sabotage" his presidential campaign in order to aid Clinton. The Ukrainian embassy in Washington denied the accusations. The Senate Judiciary Committee had been set to compel Trump's former campaign manager, Paul Manafort, to testify at a hearing on Wednesday, but rescinded the subpoena late on Tuesday as negotiations over his participation continued. Manafort has started turning over documents to the committee and is negotiating a date to be interviewed, the panel said in a statement. The committee is looking at a June 2016 meeting in New York with a Russian lawyer organised by Trump's eldest son, Donald Trump Jr. Trump Jr. Released emails this month that showed he welcomed the prospect of receiving damaging information at the meeting about Clinton. On Friday, the panel had asked that Manafort and Trump Jr. appear at the Wednesday hearing, but a witness list released on Tuesday evening included neither of their names. Manafort met with Senate Intelligence Committee staff on Tuesday morning, his spokesman said. On Tuesday, Trump's son-in-law, Jared Kushner, spent three hours with the House of Representatives intelligence panel, his second straight day on Capitol Hill answering questions about his contacts with Russians during the campaign. Kushner had a "very productive session" with the House Intelligence Committee, Democratic Representative Adam Schiff said after the meeting. Republican Representative Michael Conaway said Kushner was "straightforward and forthcoming. He wanted to answer every question that we had." Kushner, who is now a top aide in Trump's White House, told reporters on Monday he had no part in any Kremlin plot. US House Republicans on Tuesday rejected a legislative effort by Democrats to obtain Treasury Department documents that could show any ties between the finances of Trump, his inner circle and the Russian government. -Reuters