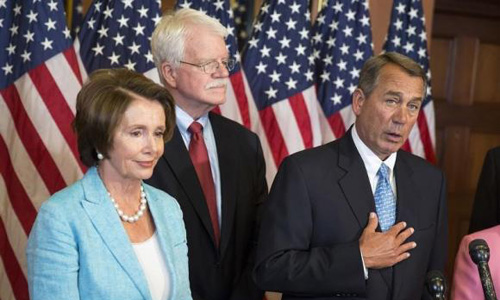 WASHINGTON/NEW YORK - The US House of Representatives on Thursday overwhelmingly approved a bill to permanently repair the formula for reimbursing Medicare physicians, marking a rare bipartisan achievement and sending the issue next to the Senate. The measure drafted and driven forward by Republican House Speaker John Boehner and Democratic Leader Nancy Pelosi would fix a long-standing problem with how Medicare pays doctors. It would also make adjustments to the health program for seniors. The House vote was 392-37. The Senate may not act until it returns from a two-week recess that starts this weekend. Some senators in both parties had concerns about the bill, but it also had strong support. Democratic President Barack Obama praised the House passage and said he hoped the Senate would approve the measure too, because he wants to sign it. "I called the Speaker, John Boehner, and the Democratic Leader, Nancy Pelosi, and I said, congratulations, this is how Congress is supposed to work. They came together; they compromised," Obama said during a trip to Birmingham, Alabama. "This is great. Let's do more of this." The Boehner-Pelosi measure would replace a 1990s formula that linked doctor pay to economic growth with a new one more focused on quality of care. It also would require means-testing of Medicare beneficiaries so higher income people pay higher premiums. The legislation was designed to spare Medicare doctors a 21-percent pay cut effective April 1 under the existing payment formula. If the Senate does not act until mid-April, doctors might still be able to avoid pay cuts because Medicare doctors' claims generally take at least 14 days to be paid. One of the government's largest social safety net programs, Medicare is health insurance that serves 54 million elderly and disabled people. Under the plan, a Medicare recipient with annual income of between $133,000 and $160,000 would see their Medicare premium share increase from 50 to 65 percent, and a recipient with annual income between $160,000 and $214,000 would pay 75 percent rather than 65 percent. But the conservative Heritage Foundation's Robert Moffit said this was "timid" reform affecting just 6 percent of the Medicare population. BOOST FOR HEALTHCARE COMPANIES Wall Street analysts, who have been skeptical about the bill, said it would help healthcare services companies whose revenues depend on government Medicare reimbursements. More broadly, the bill could be a positive sign for chances of bipartisan agreement on coping with health care industry changes that could come if the US Supreme Court in June rules against federal subsidies under Obamacare, said analyst Brian Tanquilut at investment bank Jefferies in a research note. He added that this could help the stock prices of hospital companies, such as Community Health Systems, HCA Holdings Inc and Tenet Healthcare. The proposal would add $141 billion to the US deficit over 10 years, the Congressional Budget Office said on Wednesday. Its overall cost would be about $214 billion, but about $73 billion would be offset through savings in the bill, CBO said. Despite the addition to the deficit, Boehner said it was the first real reform to U.S. "entitlement" programs in nearly 20 years and marked a start to solving the US "spending problem." "This is what we can accomplish when we are focused on common ground," Boehner said on the House floor. Pelosi said she hoped the bipartisan effort "will be a model of things to come." CHILDREN'S HEALTH PROGRAM A KEY The legislation includes a two-year extension of the Children's Health Insurance Program (CHIP) for low-income children and a two-year extension of funding for community health centers. Both were high priorities for Democrats. However, some Senate Democrats have expressed concern about anti-abortion language in the bill and their desire for four years, not two, of CHIP funding. And conservative Republican Senator Jeff Sessions said Thursday he was concerned because the bill was not totally paid for. Congressional gridlock in recent years has decreased the chances of any bill's becoming law. Most of those voting against the bill in the House were conservative Republicans opposed to the deficit impact. "You obviously have got to be concerned about the cost when you have a debt situation the way we do," said Representative Jim Jordan. - REUTERS