US, Iran positive after nuclear talks, say much left to do 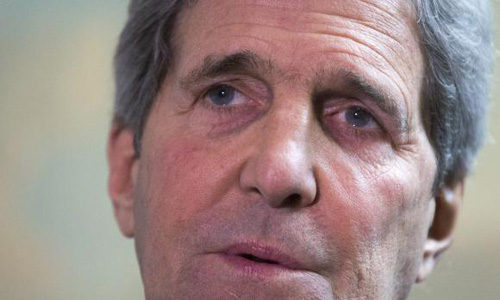 US, Iran positive after nuclear talks, say much left to do

GENEVA (Reuters) - The United States made some progress in talks with Iran on its nuclear program and managed to "sharpen up some of the tough issues", a senior US official said on Monday, but both sides said much remained to be done. Negotiators from Iran and six major powers agreed to resume talks next Monday at a venue to be decided, the official said, speaking after US Secretary of State John Kerry and Foreign Minister Mohammad Javad Zarif held two-day talks in Geneva. Zarif told Iran's Fars news agency: "We had serious talks with the P5+1 representatives and especially with the Americans in the past three days ... But still there is a long way to reach a final agreement." An Iranian source told Reuters that Zarif and Kerry would return to the Swiss city to launch the next round on March 2. The P5+1 group -- the United States, Russia, China, Britain, France and Germany -- are seeking to negotiate an agreement with Tehran to address concerns that Iran is seeking nuclear weapons technology, something it denies. "These were very serious, useful and constructive discussions. We have made some progress but we still have a long way to go. We did very much sharpen up some of the tough issues so we can work to resolution," the senior US administration official told reporters. Negotiators hope to meet a self-imposed March 31 deadline for an initial political deal, but the US official said that would not "make us rush to an agreement that does not fulfill the objectives that the president has given to us." The aim of ensuring Iran does not acquire a nuclear weapon "has to be met and that is not about the deadline, it is about the purpose", the official said. Iran, which denies having any nuclear weapons program, hopes a deal will bring relief from international sanctions.   "BREAKOUT" CAPACITY   Diplomats say the six major powers aim for a deal lasting at least 10 years under which Iran would need at least one year to produce enough highly enriched uranium for a single nuclear bomb, the so-called "breakout" capacity. "We have always said we will have a one-year breakout time for a double digit number of years and that remains the case," the senior US official said on Monday. Reflecting the technical nature of the latest talks, US Energy Secretary Ernest Moniz and Iran's atomic nuclear chief Ali Akbar Salehi took part. Helga Schmid, political director of the European Union's External Action Service, also attended. The approaching deadline has caused divisions between the United States and one of its closest allies, Israel, which has called the talks "dangerous" and "astonishing". The United States has accused it of distorting Washington's position. Israeli Defense Minister Moshe Ya'alon said in a statement on Monday: "The agreement with Iran as it is coming together now is a great danger to Western world peace and a threat to Israel's security." Ya'alon said the deal would permit Iran to be freed from current economic sanctions on it while continuing to enrich uranium. He called Iran "the most dangerous regime" and a central factor behind instability in the Middle East. Israel has the Middle East's only nuclear arsenal and has threatened to attack Iran if it is not satisfied over plans for Tehran's nuclear program.