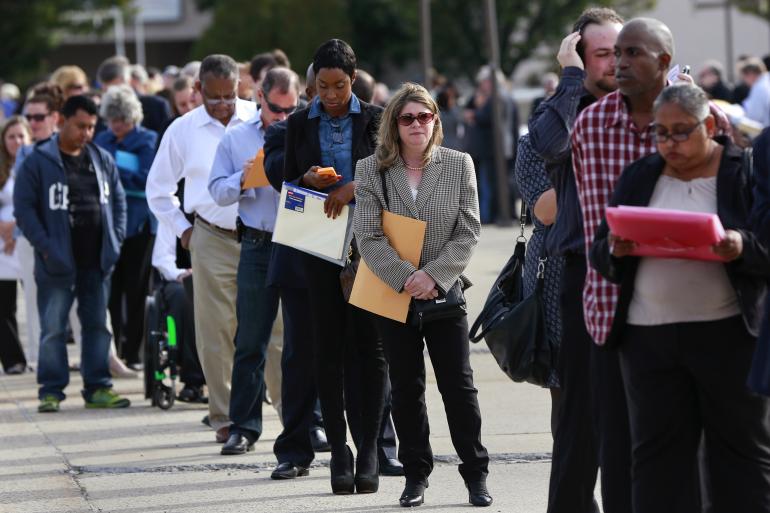 WASHINGTON - US employers added the fewest number of jobs in more than a year in March, the latest sign of weakness in the economy and one likely to further delay an anticipated interest rate increase by the Federal Reserve. Nonfarm payrolls rose 126,000 last month, less than half February's pace and the smallest gain since December 2013, the Labor Department said on Friday. The weakness was concentrated in the goods-producing sector, which has been hurt by a strong dollar and lower crude oil prices. Leisure and hospitality also saw a sharp slowdown in jobs growth, suggesting harsh winter weather could have dragged on hiring. While the jobless rate held at a more than 6-1/2-year low of 5.5 percent, the workforce shrank. The labor force participation rate returned to a more than 36-year low reached late last year. "The report confirms the emerging narrative of slowing growth momentum seen in the other economic indicators. It will weaken the argument for a mid-year (rate) hike," said Millan Mulraine, deputy chief economist at TD Securities in New York. The tepid increase in payrolls ended 12 straight months of job gains above 200,000 - the longest streak since 1994. In addition, data for January and February were revised to show 69,000 fewer jobs created than previously reported, giving the report an even weaker tone. After its robust stretch, the jobs figures now appear more in line with other signals from consumer spending to housing starts and manufacturing that have suggested the economygrew at a sub-1 percent annual rate in the first quarter. Economists had forecast that payrolls would rise 245,000 last month. Prices for US government debt rallied as investors pushed back their expectations for a Fed rate hike, while US stock index futures fell about 1 percent. The dollar dropped against a basket of currencies. The US central bank has kept overnight interest rates near zero since December 2008, but a number of officials have said an increase will likely be considered at its June policy-setting meeting. While economic growth is expected to rebound, it appears increasingly unlikely the Fed will have sufficient signs of strength in hand by then. "Now the timing for the lift-off could be delayed to September or even to December. The June date is not off the table, however, assuming the economy and employment rebound," said Sung Won Sohn, an economics professor at California State University Channel Islands in Camarillo. DOLLAR AND OIL HURT The buoyant dollar and lower oil prices have combined to crimp the profits of some large companies, forcing a reduction in capital spending. Equipment maker Caterpillar Inc has warned that lower oil prices will hurt its business in 2015, and Procter & Gamble, the world's largest household products maker, has cautioned that the dollar would hit its profits. The dollar has gained about 13 percent against the currencies of the main US trading partners since last June. Economists say the impact is equivalent to a half-point interest rate hike. At the same time, the sharp oil price drop has curtailed US drilling activity. Payrolls in the mining sector fell 11,000, reflecting ongoing weakness in oil and gas extraction. Energy producers have idled half of their rigs since October. A harsh winter and a now-settled labor dispute at normally busy West Coast ports have also weighed on activity, as has softer global demand. Bad weather is estimated to have lopped off as much a seven-tenths of a percentage point from first-quarter growth. Construction employment fell 1,000 last month, while manufacturing payrolls slipped by 1,000. There was, however, some good news in the report. Average hourly earnings increased 0.3 percent. Even so, that only lifted the year-on-year gain to 2.1 percent, in the same tepid range that earnings growth has held to for several years. With Wal-Mart and McDonald's recently announcing pay increases for their hourly workers, wage growth could gain traction in the months ahead. Other companies, including TJX Cos Inc and health insurer Aetna, also have announced pay hikes. Although the labor force participation rate, or the share of working-age Americans who are employed or at least looking for a job, slipped one-tenth of a percentage point to 62.7 percent in March, other measures on the Fed's so-called dashboard continued to improve. A broad measure of joblessness that includes people who want to work but have given up searching and those working part-time because they cannot find full-time employment fell to a more than 6-1/2-year low of 10.9 percent from 11 percent in February. The number of Americans unemployed for 27 weeks or longer also declined to its lowest point since November 2008. In a sign that cold weather could have undercut job growth, the average work week fell to 34.5 hours, the lowest since September, from 34.6 in February. About 182,000 people said they could not get work because of inclement weather, slightly above the historical average of 141,000. "It is possible that the colder-than-normal weather slowed hiring activity," said Lewis Alexander, chief economist at Nomura Securities International in New York. - Reuters