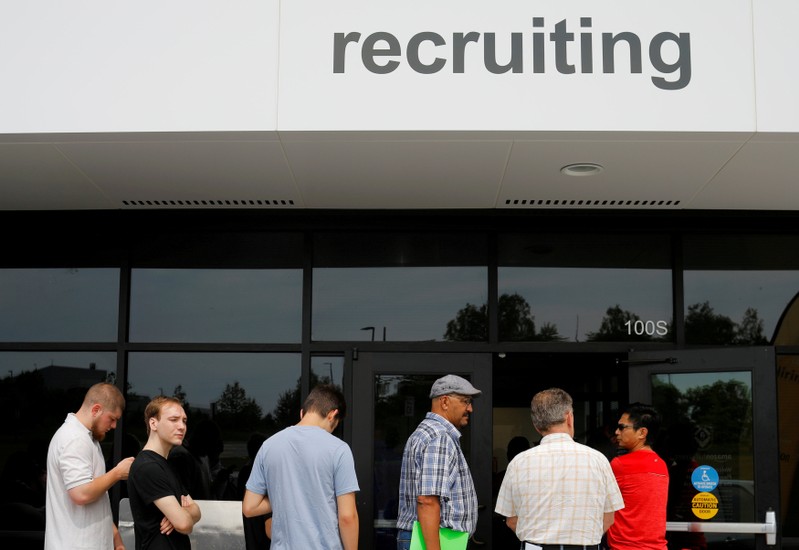 WASHINGTON (Reuters) - US job growth likely accelerated in May as warmer weather boosted hiring at construction sites, but wage gains are expected to have remained marginal, pointing to moderate inflation pressures in the economy. Nonfarm payrolls probably increased by 188,000 jobs last month, according to a Reuters survey of economists. The economy added 135,000 and 164,000 jobs in March and April, respectively. “Poor weather had been a negative factor for employment growth in both March and April,” said Ellen Zentner, chief economist at Morgan Stanley in New York. “There should be a rebound from this adverse impact in May. In particular, we look for a robust gain in construction jobs.” Average hourly earnings are expected to have risen 0.2 percent last month after edging up 0.1 percent in April. That would lift the annual increase in average hourly earnings to 2.7 percent from 2.6 percent in April. A string of strong economic data, including consumer spending and industrial production, had fanned fears of inflation against the backdrop of a $1.5 trillion income tax cut package and increased government spending. Inflation is running just below the Federal Reserve’s 2.0 percent target. Monthly job gains have averaged about 200,000 this year, more than the roughly 120,000 needed to keep up with growth in the working-age population. The unemployment rate is forecast unchanged at a near 17-1/2-year low of 3.9 percent. The closely watched employment report on Friday will probably cement expectations that the Fed will raise interest rates in June. The US central bank increased borrowing costs in March and forecast at least two more rate hikes for this year. But much depends on financial market conditions, which have tightened in recent days following a political crisis in Italy and renewed fears of a trade war after the Trump administration imposed tariffs on steel and aluminum imports from Canada, Mexico and the European Union. “June is a done deal. The bigger question is will they raise a total four times this year or three?” said Mark Doms, a senior economist at Nomura in New York. “Given the uncertainty in Europe and maybe to a lesser extent the uncertainty over trade policy, we think that the Fed will not signal that they are going to hike four times at the June meeting.”

Though the labor market is viewed as being close to or at full employment, there is still some slack remaining. Some economists argue that the unemployment rate is overstating the strength of the jobs market, noting that there was a big pool of unemployed people at the margins of the labor market who could be enticed to rejoin. The jobless rate is within striking distance of the Fed’s forecast of 3.8 percent by the end of this year. “Upwards of 70 percent of the newly employed are coming from out of the labor force as opposed to those ‘actively’ looking for work,” said Elise Gould, a senior economist at the Economic Policy Institute in Washington. “Employers and workers alike seem to recognize the slack out there and workers still do not have sufficient leverage to bid up their wages.” There is optimism that wage growth will pick up. Job gains are gradually slowing as employers struggle to find qualified workers. Economists expect the worker shortage will force companies to raise wages. The Fed’s latest Beige Book report of anecdotal information on business activity collected from contacts nationwide showed labor market conditions remained tight across the country in late April and early May. The Fed said contacts continued to report difficulty filling positions across skill levels. There were notable shortages of truck drivers, sales personnel, carpenters, electricians, painters, and information technology professionals, the central bank said in its report. “If payroll growth does decelerate a little it would get us closer to the point where earnings growth would start to accelerate a little bit,” said Lou Crandall chief economist at Wrightson ICAP in Jersey City. Construction payrolls are expected to have increased by at least 20,000 jobs in May after rising by 17,000 jobs in April. Construction employment fell in March for the first time in eight months. Manufacturers are forecast to have added another 20,000 jobs last month on top of the 24,000 created in April. Government payrolls are expected to have increased by 5,000 jobs, reversing April’s 4,000 drop.