US job growth seen strong in June, wages picking up 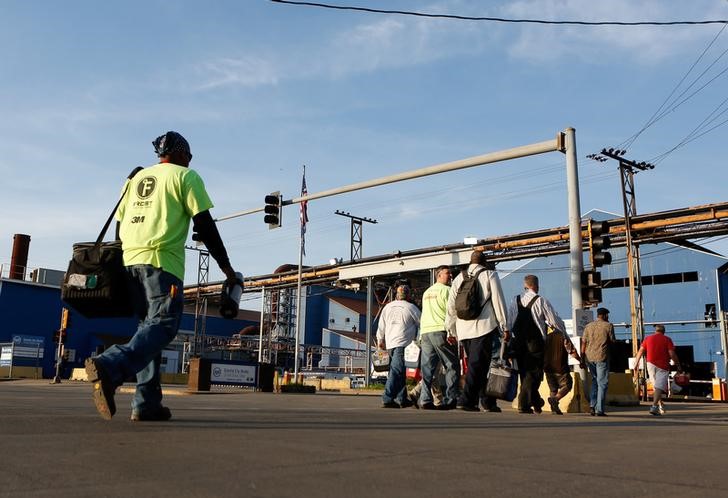 US job growth seen strong in June, wages picking up

WASHINGTON (Reuters) - US employers likely maintained a brisk pace of hiring in June while increasing wages for workers, which would reinforce expectations of robust economic growth in the second quarter and allow the Federal Reserve to continue raising interest rates. Nonfarm payrolls probably increased by 195,000 jobs last month, adding to the 223,000 positions generated in May, according to a Reuters survey of economists. The economy needs to create roughly 100,000 jobs per month to keep up with growth in the working-age population. The Labor Department will publish its closely watched employment report on Friday at 0830 EDT (1230 GMT). “June’s employment report is likely to show some further tightening of the labor market,” said Harm Bandholz, chief US economist at UniCredit Research in New York. “That together with rising inflation should keep the Fed on track to raise interest rates two more times this year.” Minutes of the Fed’s June 12-13 policy meeting offered an upbeat assessment of the labor market. The US central bank increased interest rates last month for the second time this year and has projected two more rate hikes by year end. The unemployment rate is forecast holding at an 18-year low of 3.8 percent in June. It has declined three-tenths of a percentage point this year and is near the Fed’s estimate of 3.6 percent by the end of this year. Job gains in June could, however, come below expectations amid growing anecdotal evidence of worker shortages across all sectors of the economy. From manufacturing to services industries, companies are reporting difficulties finding skilled workers such as truck drivers, carpenters and electricians. “Clearly, firms are looking for workers and have become somewhat desperate, but if they cannot find them, then job growth could be lower than the consensus,” said Joel Naroff, chief economist at Naroff Economic Advisors in Holland, Pennsylvania. “A disappointing number would not be a sign of weakness, other than in labor supply.”

There were a record 6.7 million unfilled jobs in April. In a bid to retain and attract workers, companies are steadily increasing wages. Average hourly earnings are forecast rising 0.3 percent in June after a similar increase in May. That could boost the annual increase in average hourly earnings to as high as 2.9 percent, the largest gain since June 2009, from 2.7 percent in May. Strong annual wage growth would offer confirmation that inflation pressures are building. The Fed’s preferred inflation measure hit the central bank’s 2 percent target in May for the first time in six years and is expected to remain high, in part due to the tightening job market. The employment report would add to data such as consumer spending and trade that have suggested a sharp acceleration in economic growth in the second quarter. Gross domestic product estimates for the April-June period are above a 4 percent annualized rate, double the 2.0 percent pace logged in the first quarter. But the Trump administration’s “America First” trade policy, which has left the United States on the brink of trade wars with other major economies poses a risk to the labor market and economy. President Donald Trump has imposed tariffs on a range of imported goods, including steel and aluminum, to protect domestic industries from what he says is unfair competition from foreign manufacturers. Major trade partners, including China, Canada, Mexico and the European Union, have retaliated with their own tariffs. US tariffs on $34 billion worth of Chinese goods are due to come into effect on Friday. Beijing has said it would respond in equal measure. Economists expect the manufacturing sector to bear the brunt of the tit-for-tat tariffs, through a slowdown in hiring and capital expenditure. “It’s hard to fathom how the robust manufacturing conditions will be sustained,” said Joe Brusuelas, chief economist at RSM in New York. Manufacturers are expected to have added another 15,000 jobs to their payrolls in June on top of the 18,000 created in May. Construction payrolls likely increased after rising by 25,000 in May. Further gains are expected in government employment after payrolls rose by 5,000 jobs in May.