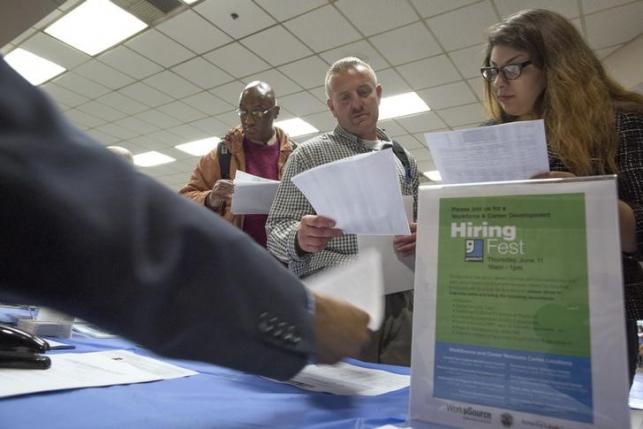 WASHINGTON – US employers slammed the brakes on hiring over the last two months, raising new doubts the economy is strong enough for the Federal Reserve to raise interest rates by the end of this year. Payrolls outside of farming rose by 142,000 last month and August figures were revised sharply lower to show only 136,000 jobs added that month, the Labor Department said on Friday. That marked the smallest two-month gain in employment in over a year and could fuel fears that the China-led global economic slowdown is sapping America's strength. "You can’t throw lipstick on this pig of a report," said Brian Jacobsen, a portfolio strategist at Wells Fargo Funds Management in Menomonee Falls, Wisconsin. The weak job growth took Wall Street by surprise and U.S. stocks sold off while the dollar also weakened and yields for government bonds fell. Bets on interest rate futures showed investors only saw a 30 percent chance of a Fed rate hike in December, down from just under 50 percent before the job report's release. "(With) a weak report here, in combination with some of the other weakness that we are seeing across the globe, the odds get dinged for December," said Tom Porcelli, an economist at RBC Capital Markets. Investors saw virtually no chance the Fed would end its near-zero interest rate policy at its only other scheduled meeting this year, to be held later in October. Futures prices indicated investors were betting the Fed would probably hike in March. US factories are feeling the global chill and shed 9,000 jobs in September after losing 18,000 in August, according to the Labor Department's survey of employers. "We saw events in China lead to some global financial turmoil and you're seeing that in the data here," White House chief economist Jason Furman told Reuters. New orders received by US factories fell 1.7 percent in August, the Commerce Department said in a separate report.. Paul Ryan, a top Republican lawmaker in the House of Representatives, said the weak turn in the economy should be a wake-up call for Washington to reform the national economy with new tax laws, free trade agreements and policies to get people off welfare. "This recovery continues to disappoint, but we can't accept it as the new normal," Ryan said. The recent pace of job growth should have been enough to push the unemployment rate lower because only around 100,000 new jobs are needed a month to keep up with population growth. But the jobless rate held steady at 5.1 percent. The unemployment rate is derived from a separate survey of households that showed 350,000 workers dropping out of the labor force last month, as well as a lower level of employment. The share of the population in the work force, which includes people who have jobs or are looking for one, fell to 62.4 percent, the lowest level since 1977. Average hourly wages fell by a cent to $25.09 during the month and were up only 2.2 percent from the same month in 2014, holding around the same levels seen all year and pointing to marginal inflationary pressures. The report did have a few bright spots that might be welcomed by Fed chief Janet Yellen, who said last week the economy was doing well enough to warrant higher rates this year. The number of workers with part-time jobs but who want more hours fell by 447,000 in September to 6.0 million. Yellen has signaled that the elevated number of these workers points to hidden slack in the labor market that isn't captured by the jobless rate. A measure of joblessness that includes these workers and is closely followed by the Fed fell to 10 percent, its lowest level since May 2008. Economists polled by Reuters had expected job growth of 203,000 in September. All told, revised estimates meant 59,000 fewer jobs were created in July and August than previously believed. In another grim sign, the number of hours worked in the country fell 0.2 percent, raising the specter that some broader softness might have gripped the economy last month. Some of the strongest headwinds on the US economy come from the commodity sector, which has slowed in part because of weaker demand from China. The price of oil has fallen nearly 50 percent over the last year, and US mining payrolls, which include energy sector jobs, fell by 10,000 in September, the ninth straight month of declines. –Reuters