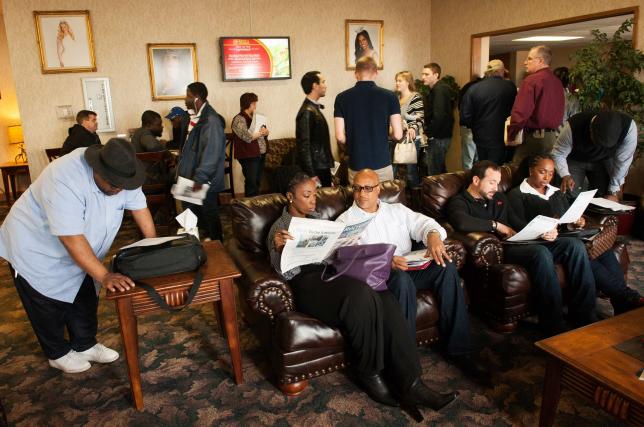 WASHINGTON - The number of Americans filing new claims for jobless benefits rose less than expected last week and the four-week moving average of claims hit its lowest level since 2000, suggesting an abrupt slowdown in job growth in March was likely a fluke. Initial claims for state unemployment benefits increased 14,000 to a seasonally adjusted 281,000 for the week ended April 4, the Labor Department said on Thursday. It was the fifth straight week that claims remained below 300,000, a threshold that is associated with a strengthening labor market. "The claims data provide no confirmation of the March employment slowdown," said John Ryding, chief economist at RDQ Economics in New York. U.S. Treasury debt yields rose on the data and also as Greece's 450 million euro loan payment to the International Monetary Fund reduced safety bids for government debt. U.S. stocks edged up at the open while the dollar rose against a basket of currencies. Job growth slowed sharply in March, with nonfarm payrolls increasing by only 126,000, ending a 12-month stretch of employment gains above 200,000. But with the weakness mostly concentrated in the weather-sensitive leisure and construction sectors, economists downplayed the slowdown. Last week's tepid employment report joined weak consumer and business spending, industrial production and housing starts data in suggesting the economy grew at a sub-1 percent annual rate in the first quarter. Activity has been hit by a harsh winter, which is estimated to have chopped as much as seven-tenths of a percentage point from first-quarter growth. A now-settled labor dispute at normally busy ports on the West Coast, softer global demand and a stronger dollar also have weighed on the economy. Economists had forecast claims rising to 285,000 last week. A Labor Department analyst said there was nothing unusual in the state-level data. Claims tend to be volatile around Easter because of the shifting nature of the holidays. The four-week moving average of claims, considered a better measure of labor market trends as it irons out week-to-week volatility, fell 3,000 to 282,250 last week, the lowest level since June 2000. "If claims remain this low, and we think they might even head lower in the coming weeks, it will be hard to claim there is persistent weakness in the labor market," said Guy Berger, an economist at RBS in Stamford Connecticut. The Federal Reserve is watching the jobs market as it contemplates raising interest rates this year. The claims report also showed the number of people still receiving benefits after an initial week of aid fell 23,000 to 2.30 million in the week ended March 28. That was the lowest level since December 2000. The labor market strength was underscored by a report on Tuesday showing job openings surging to a 14-year high in February and less competition for jobs among the unemployed. A separate report on Thursday from the Commerce Department showed wholesale inventories rose in February as sales remained weak, suggesting wholesalers might have little incentive to aggressively restock warehouses in coming months. Stocks at wholesalers gained 0.3 percent after advancing 0.4 percent in January. Sales fell 0.2 percent in February after declining 3.6 percent the prior month. At February's sales pace it would take wholesalers 1.29 months to clear shelves, unchanged from January. - Reuters