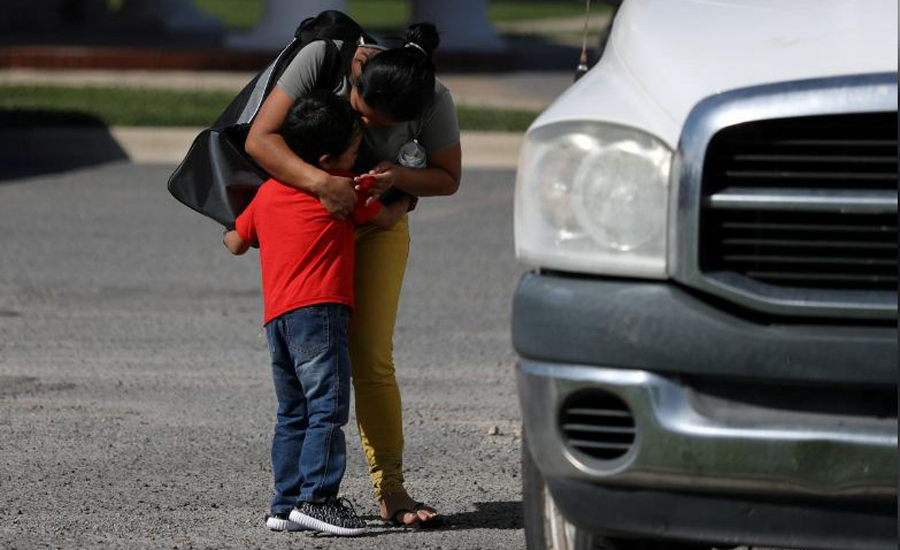 NEW YORK (Reuters) - The US government was barred temporarily on Monday from quickly deporting immigrant parents reunited with their children while a federal court considers the impact on childrens’ rights to seek asylum. The government is working to meet a court order to reunite by July 26 around 2,500 immigrant children who were separated by U.S. immigration officials from their parents at the U.S.-Mexican border. The American Civil Liberties Union, a rights group that brought the case that led to the reunification order, said in court papers on Monday that immigrant parents should be given a week after being reunited to decide if they want to be deported alone or as a family. “A one-week stay is a reasonable and appropriate remedy to ensure that the unimaginable trauma these families have suffered does not turn even worse because parents made an uninformed decision about the fate of their child,” the ACLU wrote in a filing with a San Diego federal court. At a hearing on Monday, Judge Dana Sabraw of the U.S. District Court for the Southern District of California in San Diego said he would issue a stay on deporting reunified parents until the government could respond to the ACLU request. Sabraw gave the government a week to respond and will consider the ACLU request on July 24. The ACLU has used the case to challenge a policy of President Donald Trump’s administration of separating families as part of a broader crackdown on illegal immigration. The president ordered the practice stopped on June 20 after widespread public outcry. Sabraw ordered on June 26 that children should be returned to their parents within specified deadlines, and has been overseeing the process. In its filing, the ACLU said parents must determine if their child should remain in the United States to pursue their own asylum claim, but that decision requires time to discuss with a lawyer or advocate for the child. The rights group said it was acting on “persistent and increasing rumours” of rapid deportations, which it said the U.S. government has not denied. The U.S. Department of Homeland Security did not immediately respond to a request for comment. Many of the immigrants separated from their children were seeking asylum after fleeing violence and crime in Guatemala, El Salvador and Honduras. Children were sent to multiple care facilities across the country, and their parents were incarcerated in immigration detention centres or federal prisons - in keeping with the government’s “zero tolerance” policy under which all adults crossing the border illegally would face prosecution.