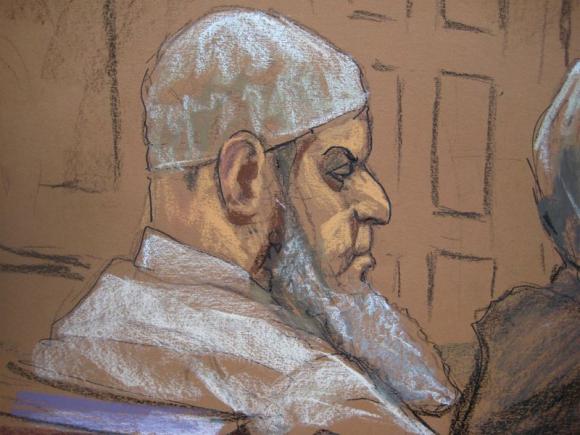 NEW YORK (Reuters) - A Saudi man described by prosecutors as one of Osama bin Laden's most trusted lieutenants was convicted in a federal court in New York on Thursday in connection with the 1998 bombings of US embassies in Kenya and Tanzania. Khalid al-Fawwaz, 52, faces up to life in prison after a jury convicted him on four conspiracy counts on their third day of deliberations. US Attorney Preet Bharara said the verdict marked the 10th conviction at trial or via a guilty plea of a defendant tied to the bombings, which killed 224 people and injured more than 4,000. "We hope this verdict gives some comfort to al Qaeda's victims around the world," Bharara said in a statement. Al-Fawwaz was not charged with planning the attacks. Instead, prosecutors said he functioned as a key bin Laden associate while living in London, disseminating the al Qaeda leader's declarations of war to the media and sending equipment to al Qaeda members in Africa. Al-Fawwaz was also accused of operating an al Qaeda training camp in Afghanistan in the early 1990s and helping lead an al Qaeda cell in Kenya's capital, Nairobi, that later conducted surveillance ahead of the embassy bombing there. A defence attorney, Bobbi Sternheim, said al-Fawwaz would appeal. "Trying a pre-9/11 case in a post-9/11 era within blocks of the World Trade Center insured Mr. al-Fawwaz would never receive a fair trial from an impartial jury," she said, referring to the Sept. 11, 2001, attacks in downtown Manhattan. Al-Fawwaz's attorneys painted their client as a peaceful dissident who shared with bin Laden a desire to effect reform in their native Saudi Arabia, but turned away from him when he began calling for violence against US civilians. Prosecutors, however, said al-Fawwaz did whatever was asked of him to help advance al Qaeda's mission. The trial featured testimony from several victims of the bombings. A number of other victims watched some of the trial from the courtroom gallery. Al-Fawwaz was arrested in London in 1998 and extradited to the United States in 2012 following a lengthy legal battle. He was originally set to be tried alongside two co-defendants, Abu Anas al-Liby of Libya and Egyptian Adel Abdul Bary. Al-Liby, also known as Nazih al-Ragye, died in custody last month after longstanding health problems. Bary pleaded guilty in September and was sentenced this month to 25 years in prison. The case is US v. al-Fawwaz, US District Court for the Southern District of New York, No. 98-1023.