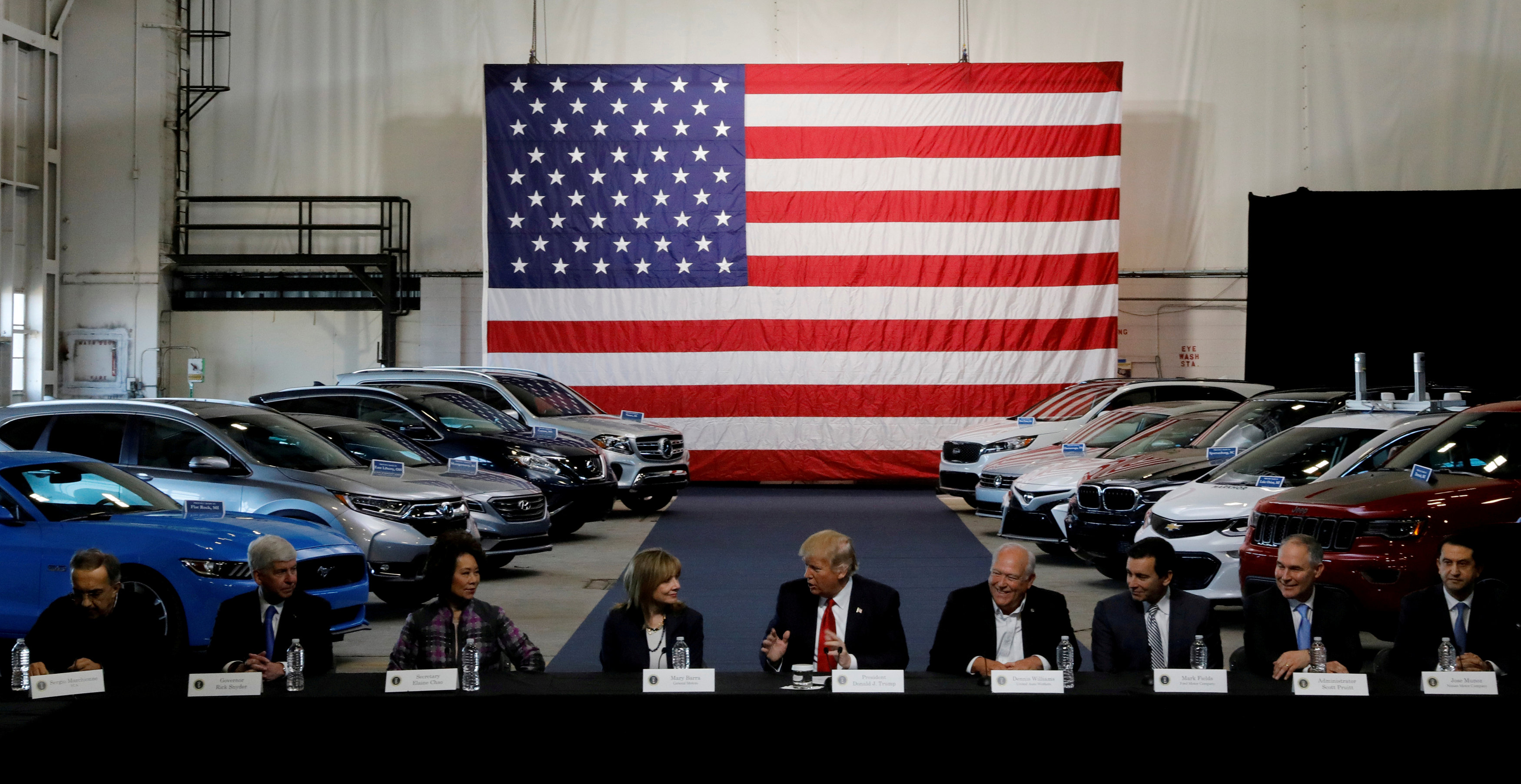 WASHINGTON (Reuters) - The Trump administration has launched a national security investigation into car and truck imports that could lead to new US tariffs similar to those imposed on imported steel and aluminum in March. The national security probe under Section 232 of the Trade Expansion Act of 1962 would investigate whether vehicle and parts imports were threatening the industry’s health and ability to research and develop new, advanced technologies, the Commerce Department said on. “There is evidence suggesting that, for decades, imports from abroad have eroded our domestic auto industry,” Commerce Secretary Wilbur Ross said in a statement, promising a “thorough, fair and transparent investigation.” Higher tariffs could be particularly painful for Asian automakers including Toyota Motor Corp, Nissan Motor Co, Honda Motor Co and Hyundai, which count the United States as a key market, and the announcement sparked a broad sell-off in automakers’ shares across the region. The governments of Japan, China and South Korea said they would monitor the situation, while Beijing, which is increasingly eyeing the United States as a potential market for its cars, added that would defend its interests. “China opposes the abuse of national security clauses, which will seriously damage multilateral trade systems and disrupt normal international trade order,” Gao Feng, spokesman at the Ministry of Commerce, said at a regular news briefing in Beijing on Thursday which focused largely on whether it is making any progress in its trade dispute with Washington. “We will closely monitor the situation under the US probe and fully evaluate the possible impact and resolutely defend our own legitimate interests.”

The probe comes as Trump courts voters in the US industrial heartland ahead of mid-term elections later this year, and opens a new front in his “America First” trade agenda aimed at clawing back manufacturing jobs lost to overseas competitors. It could raise the costs for overseas automakers to export vehicles and parts to the world’s second-largest auto market. Growing trade tensions over cars and car parts, particularly with China, could raise risks for US companies expanding their presence in the country, signs of which are already emerging. Earlier this month, Reuters reported that Ford Motor Co’s imported vehicles were being held up at Chinese ports, adding to a growing list of US products facing issues at China’s borders. The majority of vehicles sold in the United States by Japanese and South Korean automakers are produced there, but most also export to the US from plants in Asia, Mexico, Canada and other countries. Roughly one-third of all US vehicle imports last year were from Asia. In addition to recently imposed 25 percent tariffs on steel and 10 percent tariffs on aluminum imports, the administration has threatened tariffs on $50 billion worth of Chinese goods over intellectual property complaints, and Beijing has vowed to respond. The administration is also trying to renegotiate the North American Free Trade Agreement to return more auto production to the United States. Commerce said the new probe would determine whether lost domestic production had weakened the US “internal economy” and its ability to develop connected vehicle systems, autonomous vehicles, fuel cells, electric motors and batteries, and advanced manufacturing processes. In a separate statement, President Donald Trump said: “Core industries such as automobiles and automotive parts are critical to our strength as a Nation.” A Trump administration official said before the announcement that the expected move was aimed partly at pressuring Canada and Mexico to make concessions in talks to update the NAFTA that have languished in part over auto provisions, as well as pressuring Japan and the European Union, which also export large numbers of vehicles to the United States.

An ad hoc industry group representing the largest Japanese, German and other foreign automakers called “Here for America,” criticized the effort. “To our knowledge, no one is asking for this protection. This path leads inevitably to fewer choices and higher prices for cars and trucks in America,” said John Bozzella, chief executive of Global Automakers, a trade group representing Toyota, Nissan Motor Co Ltd , Hyundai Motor Co  and others, who also speaks for the broader group. A Toyota spokeswoman said that the company was monitoring the situation. Chinese automaker Geely Holding Group urged free trade practices for the auto industry, which is built on a complex supply chain under which vehicle components for any given car often originates from numerous countries. “As a global manufacturer, Geely Holding Group is in favor of free trade and open markets. Free trade creates jobs, wealth and economic growth,” a spokesman said, adding that its plant in South Carolina to produce its Volvo brand cars showed its commitment to the country. Late last week, Japan’s automakers’ association urged its export partners to keep tariffs on vehicles and components low and maintain free trade relationships. Roughly 12 million cars and trucks were produced in the United States last year, while the country imported 8.3 million vehicles worth $192 billion. This included 2.4 million from Mexico, 1.8 million from Canada, 1.7 million from Japan, 930,000 from South Korea and 500,000 from Germany, according to US government statistics. At the same time, the United States exported nearly 2 million vehicles worldwide worth $57 billion. German automakers Volkswagen AG , Daimler AG  and BMW AG all have large US assembly plants. The United States is the second-biggest export destination for German auto manufacturers after China, while vehicles and car parts are Germany’s biggest source of export income. Asked if the measures would hit Mexico and Canada, a Mexican source close to the NAFTA talks said: “That probably is going to be the next battle.”