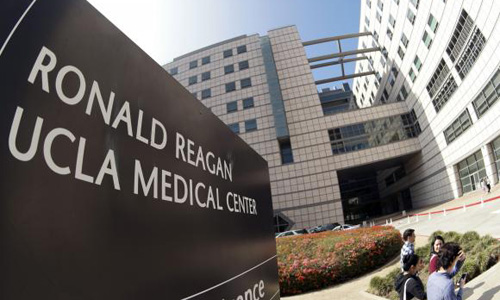 LOS ANGELES (Reuters) - A US lawmaker on Monday called on the Congress to investigate the medical scopes blamed for an outbreak of a bacterial "superbug" at a University of California, Los Angeles hospital that has infected seven patients. Representative Ted Lieu, a Democrat from California, said in a letter asking for a congressional oversight committee hearing that the outbreak of the drug-resistant Enterobacteriaceae, or CRE, bacteria posed "both health and national security" risks. "If unmitigated, the human and societal costs of CRE outbreaks will continue to rise," Lieu wrote in the letter. "A superbug infection can kill not only the patient who was exposed to a tainted duodenoscope but also family members, friends and hospital staff who interacted with the patient," he said. Officials say the duodenoscopes, which are inserted down a patient's throat during gastrointestinal procedures, spread the antibiotic-resistant bacteria to seven patients at the UCLA Ronald Reagan Medical Center, contributing to two deaths. The other five are under treatment. An additional 179 people who had endoscopies at the large teaching hospital may have been exposed to the potentially fatal pathogens, according to UCLA. On Friday, a US Centers for Disease Control and Prevention scientist said the agency was close to unveiling a detailed procedure designed to prevent the scopes from spreading the superbug. Called a "surveillance culture," the procedure involves swabbing the device after it has been disinfected and then allowing any microbes to grow into detectable colonies, much as doctors take throat swabs to determine if a patient has a strep infection. The UCLA medical center has said it had been sterilizing the duodenoscopes implicated in the infection according to manufacturer standards. It has said it now uses a more rigorous process that exceeds national standards. Hospitals across the United States have reported exposures from the same type of medical equipment in recent years. The US Food and Drug Administration has said it was working with other government agencies and scope manufacturers to minimize risks to patients.