US may be unable to defend its Syria recruits against Assad 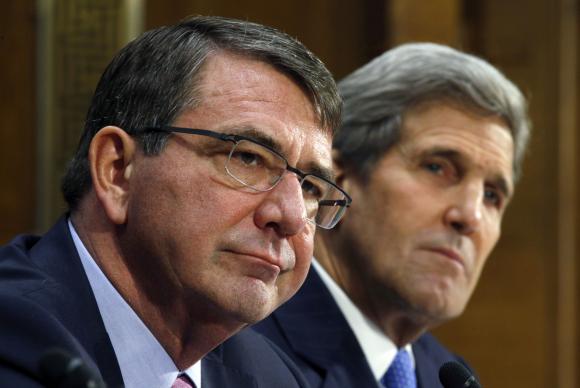 US may be unable to defend its Syria recruits against Assad

WASHINGTON - The United States does not appear to have clear-cut legal authority to protect Syrian rebels it trains from attack by forces loyal to Syrian President Bashar al-Assad, even under new war powers, US Defense Secretary Ash Carter said on Wednesday. Still, Carter told Congress, a final determination had not yet been made. The remarks underscore the deep uncertainty surrounding a fledgling US military-led training program expected to get under way in the coming weeks, first in Jordan, then at training sites in Turkey, Saudi Arabia and, later, Qatar, with the goal of training upwards of 5,000 fighters a year. President Barack Obama's government says the Syria train-and-equip program will complement the campaign against Islamic State militants across the border in Iraq. But critics say Obama's goal of focusing solely on the Islamic State in Syria is not realistic and fails to take into account the threat to US-backed fighters from forces loyal to Assad, once they're deployed on the battlefield. The top US military officer, General Martin Dempsey, testifying alongside Carter, warned that the United States would need to give some assurances of protection to the new recruits it is injecting into Syria's messy civil war. "Now the scope and scale of that protection is the part of this that’s being actively debated," Dempsey said. "But the program won’t succeed unless they believe themselves to have a reasonable chance of survival." Carter, for his part, said the fighters will need to know "whether and in what manner they will be supported" but said the matter was being discussed within the Obama administration. "That is something under active discussion. I don't believe the legal aspect of that has been determined," Carter said. Senator Bob Corker, a Republican from Tennessee who leads the Senate Foreign Relations Committee, pressed Carter. He said Pentagon lawyers indicated existing war powers authorized in 2001 and new ones now before Congress didn't give a clear pathway for US military action against Assad's forces. "Neither one gives clear-cut authority to y'all's being able to defend the train-and-equip program against Assad's assault," Corker said. "That's my understanding," Carter responded. - Reuters