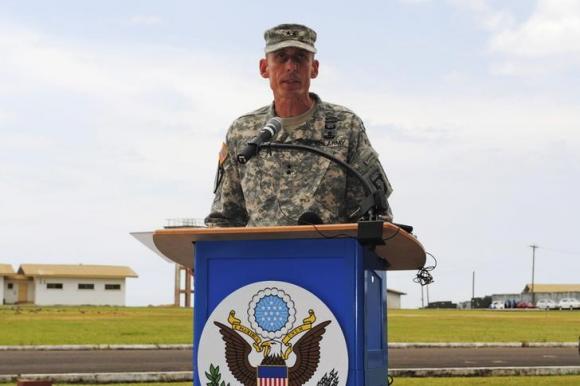 MONROVIA (Reuters) - The United States military officially ended a mission to build treatment facilities to combat an Ebola outbreak in Liberia on Thursday, months earlier than expected, in the latest indication that a year-long epidemic in West Africa is waning. Washington launched the mission five months ago and the force peaked at over 2,800 troops at a time when Liberia was at the epicenter of the worst Ebola epidemic on record. Nearly 10,000 people have died in Liberia, Sierra Leone and Guinea over the past year. More than 4,000 of those deaths were in Liberia, but the number of new cases has plummeted in recent months, leaving many treatment centers empty and the mission has already begun winding down. "While our large scale military mission is ending...the fight to get to zero cases will continue and the (Joint Force Command) has ensured capabilities were brought that will be sustained in the future," said US Army Major General Gary Volesky. The troops were deployed to support the international Ebola response mission led by the US Agency for International Development. The operation was initially expected to last between nine and 12 months, said Volesky, the mission's commander. Speaking to lawmakers during a visit to Washington on Thursday, Liberia's President Ellen Johnson Sirleaf thanked the United States for its support during the crisis. US soldiers built treatment centers, set up mobile testing labs, and provided transportation and logistical support. Military medical teams trained around 1,500 local health workers. "A lot of our health workers of this country died during the course of the Ebola crisis," Liberian nurse Juma Kollie told Reuters. "There was a need to have some attention giving to them. So the American government came in that direction." The force will withdraw over the coming weeks but more than 100 soldiers would remain in the country for several months to monitor the disease. "We are not turning our backs. We’re transitioning to a civilian operation that is already supporting more than 10,000 civilians who are working in the region," US Assistant Secretary for African Affairs Linda Thomas Greenfield said on Wednesday.