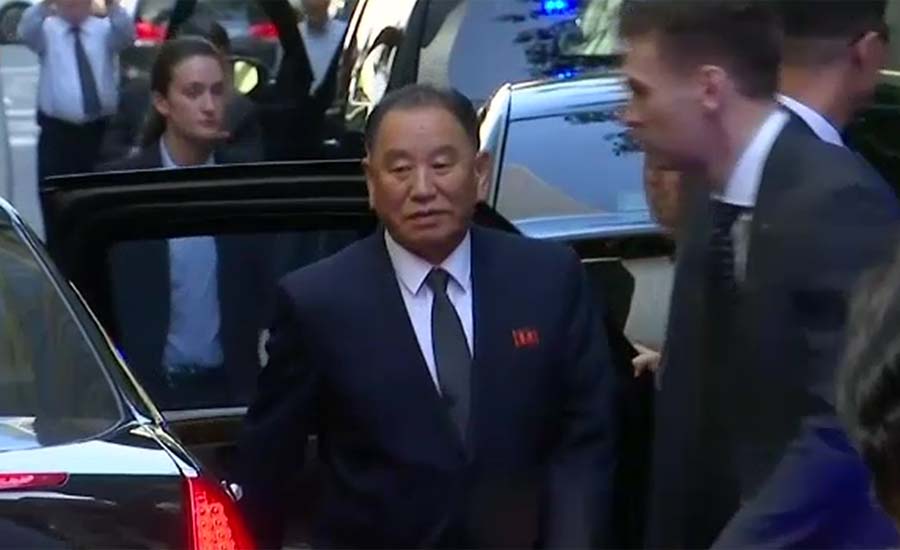 NEW YORK (Reuters) - High-ranking officials of the United States and North Korea met in New York in the first of two days of talks about the future of Pyongyang’s nuclear weapons program and a possible summit between US President Donald Trump and North Korean leader Kim Jung Un. US Secretary of State Mike Pompeo and Kim Yong Chol, a close aide of North Korean leader Kim Jung Un, met for about 90 minutes over dinner and exited without providing any detailed remarks to reporters waiting outside. Pompeo would only say that the dinner “was great” and that the two men dined on “American beef.” It was not yet known whether the two men made any progress toward narrowing long-standing differences between Washington and Pyongyang that could end decades of hostile relations. Earlier in the day, the White House left open the possibility of a Trump-Kim summit on June 12 in Singapore, despite Trump’s cancellation of the meeting just days ago. As the dinner was underway inside an apartment on New York’s East Side, just south of the United Nations, a senior State Department official separately briefed reporters on the high-level talks that were underway. Pompeo and Kim Yong Chol, vice chairman of the ruling Workers’ Party’s Central Committee, “are trying to get to know each other” following their two initial meetings this year in North Korea, said the US official who asked not to be identified. The official added that before any summit between the two leaders can occur, Pyongyang is “going to have to make clear what they are willing to do” amid demands from Washington that North Korea permanently end its nuclear weapons program. Trump, the official said, “can make a fly or no-fly decision anytime he wants,” referring to the possible unprecedented Singapore summit. If not enough progress is made to lead to a productive meeting between Trump and Kim Jung Un, the official said, “We will ramp up the pressure on them and we’ll be ready for the day that hopefully they are ready.” “Looking forward to meeting with Kim Yong Chol in New York to discuss @Potus potential summit with Chairman Kim. We are committed to the complete, verifiable, and irreversible denuclearization of the Korean Peninsula @StateDept,” Pompeo said in a Twitter post. Trump last week called off the summit after North Korea expressed anger at comments by senior US officials. But Trump later said he was reconsidering his position and US, North Korean and South Korean officials have gone ahead with summit preparations. The White House said that negotiations at the demilitarized zone along the border between North and South Korea for the summit were going well. Separately at Pearl Harbor in Hawaii, Admiral Harry Harris, the outgoing head of US Pacific Command who is Trump’s pick to be the ambassador to South Korea, said North Korea remained the United States’ most imminent threat. “And a nuclear-capable North Korea with missiles that can reach the United States is unacceptable,” Harris said. Earlier, a US official said negotiations about the summit’s agenda have so far been slow going, and the two fundamental issues, the definition of North Korean denuclearization and whether both sides would take actions at the same time or separately, remained unsettled.

Trump has sworn not to allow North Korea to develop nuclear missiles that could hit the United States and wants North Korea to “denuclearize,” or get rid of its nuclear arms. But the leadership in Pyongyang is believed to regard nuclear weapons as crucial to its survival and has rejected unilaterally disarming. The Trump administration, according to US officials, has left open the possibility of North Korea eventually getting US aid and investments if Pyongyang agrees to complete denuclearization. North Korea’s position going into the meetings with Pompeo was that a pledge of denuclearization alone should open the way to economic relief, said the official who briefed reporters earlier and spoke on condition of anonymity. South Korea’s Yonhap news agency quoted Seoul’s Unification Minister Cho Myoung-gyon as saying in a speech that the differences between North Korea and the United States on the denuclearization issue remained “quite significant” and it would not be easy to narrow the gap. However, Cho added that the engagement of the leaders of the two countries meant “chances are high that common ground can be found.” Kim Yong Chol is the most senior North Korean official to meet top officials for talks in the United States since Jo Myong Rok, a vice marshal, met then-President Bill Clinton at the White House in 2000. A former military spy chief, he has played a central role in the thaw in relations over the past six months between North Korea and South Korea, as well as the United States. North Korea defends its nuclear and missile programs as a deterrent against what it sees as US ambitions to overthrow its leadership and unite the Korean Peninsula. The United States stations 28,500 troops in South Korea, a legacy of the 1950-1953 Korean War.