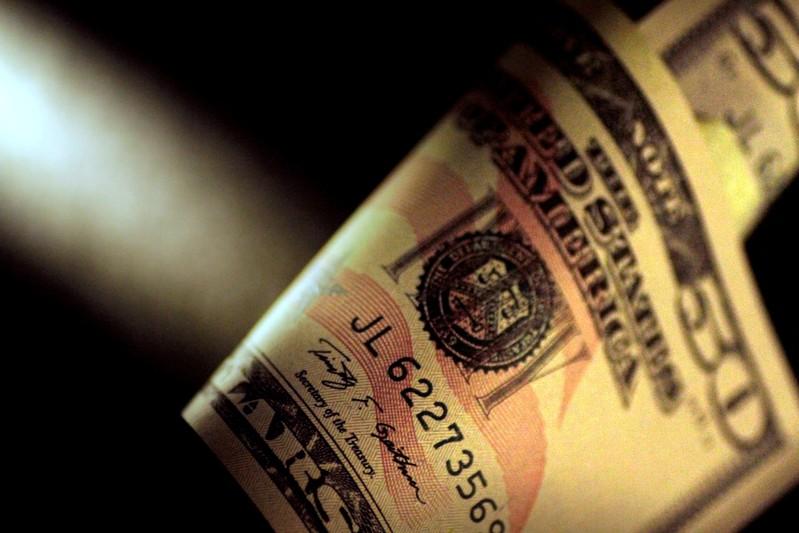 LONDON (Reuters) - The dollar slipped across the board on Wednesday as the broadly expected U.S. midterms election results of a split Congress raised expectations that any major US fiscal policy boost to the economy is unlikely for now. Market analysts said the weaker dollar indicates that any cooperation on fiscal policy will be difficult thanks to a greater majority of U.S. Democrats in the House but President Donald Trump’s policies may also come under greater scrutiny, fueling fresh political uncertainty. “The midterm results indicate that more political uncertainty is likely for now and any big fiscal boost is unlikely which is pressuring the dollar lower,” said Esther Maria Reichelt, an FX strategist at Commerzbank in Frankfurt. Against a basket of its rivals, the greenback slipped 0.2 percent to 95.98. Its weakness was particularly pronounced against the euro and the British pound, against which it fell 0.25 percent each as Treasury yields slipped three to five basis points. The greenback has outperformed most of its key rivals this year, benefiting from a robust domestic economy, higher interest rates and the effects of U.S. fiscal policy. Despite more political uncertainty in the short term, equity markets were broadly firm, cushioning any big drop in the dollar. S&P stock futures were up 0.25 percent. Gavekal strategists said the U.S. political gridlock may prove better for markets than if Republicans had got another clean sweep. “It would have provided a fiscal boost, but it may also have driven up interest rates— a big worry for equity investors,” they said in a note. High-yielding currencies such as the Australian dollar and the New Zealand dollar were firm, while perceived safe-haven currencies such as the Japanese yen and the Swiss franc fell. However, some market participants believed the domestic political uncertainty might embolden Trump to ratchet up trade tensions with China over a trade conflict. The offshore yuan weakened 0.1 percent against the dollar. “We would argue that if Trump can do less on the domestic front he is more likely to focus on external matters such as trade, which will impact risk sentiment,” said Patrick O’Donnell, investment manager at Aberdeen Asset Management in London. Elsewhere, the euro gained 0.24 percent to trade at $1.1454 versus the dollar. The single currency changed hands about one percent above this year’s trough of $1.1301 reached on Aug. 15.