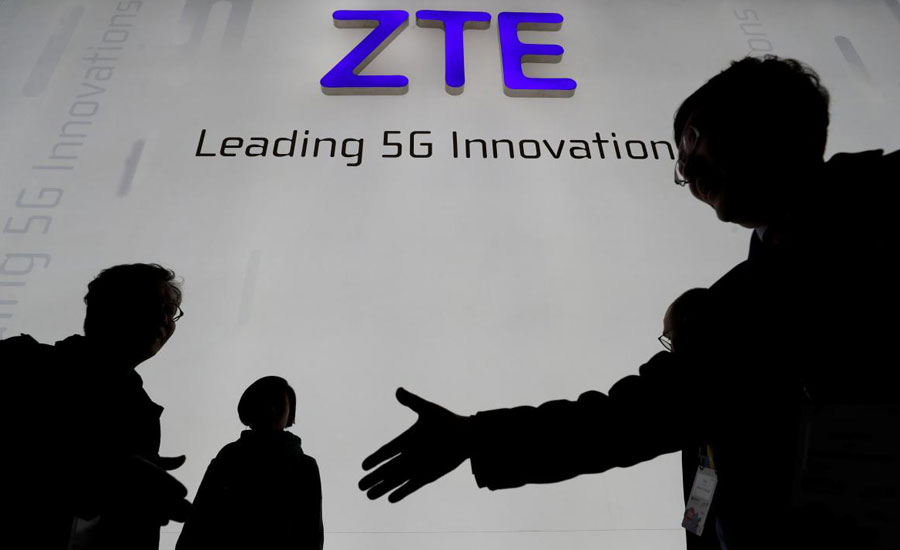 WASHINGTON (Reuters) – The Trump administration told lawmakers the US government has reached a deal to put Chinese telecommunications company ZTE Corp back in business after it pays a significant fine and makes management changes, a senior congressional aide said. US President Donald Trump appeared to confirm the deal in a tweet late on Friday. “I closed it down then let it reopen with high level security guarantees, change of management and board, must purchase U.S. parts and pay a $1.3 Billion fine.” The reported deal involving China’s second-largest telecommunications equipment maker ran into immediate resistance in Congress, where Democrats and Trump’s fellow Republicans accused him of bending to pressure from Beijing to ease up on a company that US intelligence officials have suggested poses a significant risk to US national security. ZTE was banned in April from buying U.S. technology components for seven years for breaking an agreement reached after it violated US sanctions against Iran and North Korea.. After ZTE makes a series of changes it would now be allowed to resume business with US companies, including chipmaker Qualcomm Inc. The deal, earlier communicated to officials on Capitol Hill by the Commerce Department, requires ZTE to pay a substantial fine, place US compliance officers at the company and change its management team, the aide said. The Commerce Department would then lift an order issued in April preventing ZTE from buying US products. ZTE shut down most of its production after the ruling was announced. Fox News said Trump told them on Thursday that he had negotiated the $1.3 billion fine with Chinese President Xi Jinping in a phone call. ZTE, which is publicly traded but whose largest shareholder is a Chinese state-owned enterprise, agreed last year to pay a nearly $900 million penalty and open its books to a US monitor. The penalty stemmed from for breaking an agreement after it was caught illegally shipping US goods to Iran and North Korea, in an investigation dating to the Obama administration. The company has lost over $3 billion since the April 15th ban on doing business with US suppliers, according to a source familiar with the matter. Trump on Tuesday floated a plan to fine ZTE up to $1.3 billion and shake up its management as his administration considered rolling back more severe penalties that have crippled the company. Responding to news of the administration’s deal with ZTE, Republican Senator Marco Rubio tweeted: “Yes they have a deal in mind. It is a great deal ... for #ZTE & China. #China crushes US companies with no mercy & they use these telecom companies to spy & steal from us.” Rubio, as well as Democratic Senators Chuck Schumer and Chris Van Hollen, said Congress should act to stop Trump from letting ZTE get back into business. “If the administration goes through with this reported deal, President Trump would be helping make China great again,” Schumer said Friday on Twitter. “Would be a huge victory for President Xi, and a dramatic retreat by Pres Trump. Both parties in Congress should come together to stop this deal in its tracks.” US intelligence and US law enforcement agencies have serious concerns that ZTE and other Chinese telecommunications firms use their equipment to gather intelligence on US citizens. The US Department of Defense has also stopped selling ZTE’s mobile phones and modems in stores on its military bases, citing potential security risks. William Evanina, the acting director of the National Counterintelligence and Security Center, said at his May 15 confirmation hearing that he would not use a ZTE phone nor recommend that anyone in a sensitive position in government use one. Chinese officials sought a pullback on ZTE as part of any broader deal to prevent a trade war between the world’s two biggest economies. US Commerce Secretary Wilbur Ross is scheduled to visit China next week for another round of talks. White House legislative director Marc Short told PBS Friday that Ross “would be making that announcement in the coming day” of a resolution of the ZTE issue. ZTE needs U.S. components for its mobile phones and network equipment. US companies provide an estimated 25 per cent to 30 per cent of components in ZTE’s equipment. As part of the agreements ZTE made last year it dismissed four senior employees. Shares of ZTE’s US suppliers traded higher on Friday. Optical networking equipment maker Acacia Communications Inc, which got 30 per cent of 2017 revenue from ZTE, rose 4.4 per cent. Optical component company Oclaro Inc, which received 18 percent of its fiscal 2017 revenue from ZTE, rose 2.7 per cent. Reuters reported earlier this week citing sources that a proposed trade deal with China would lift the ZTE ban. In return, China would eliminate tariffs on US agriculture or agree to buy more farm products from the United States.