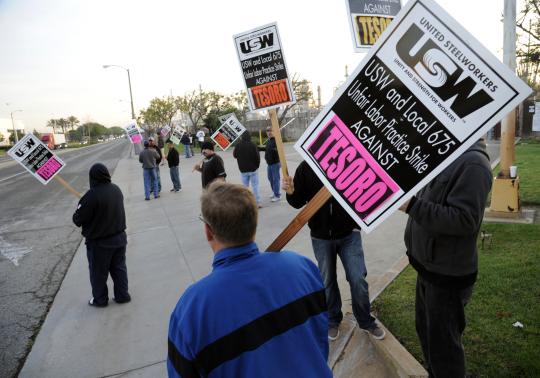 HOUSTON (Reuters) - The largest US refinery strike in 35 years entered its fourth week as workers at 12 refineries accounting for one-fifth of national production capacity were walking picket lines as of 12 a.m. CST (0600 GMT) on Sunday, according to union officials. A total of 6,550 members of the United Steelworkers union (USW) at 15 plants, including the 12 refineries, are involved in the work stoppage that began on Feb. 1 when talks for a new three-year contract between the USW and lead oil company negotiator Shell Oil Co stopped. Talks were resumed but have halted again after nearly reaching an agreement on Friday, said sources familiar with the negotiations. After the latest breakdown between the two sides, Steelworkers leaders targeted Shell, which is the US arm of Royal Dutch Shell Plc, calling workers out at a chemical plant and three refineries in the company's Motiva Enterprises [MOTIV.UL] joint-venture with Saudi Aramco [SDABO.UL]. The first work stoppage of the three refineries was at the nation's largest, the 600,250 barrel per day Port Arthur, Texas, refinery, where workers walked out at 12 a.m. on Saturday. Twenty-four hours later, USW members were also picketing at Motiva's 235,000 bpd Convent, Louisiana, and 238,000 bpd Norco, Louisiana, refineries and the Shell chemical plant in Norco. In announcing the strikes, USW International union President Leo Gerard said they were the result of the industry's bargaining tactics. "The industry’s refusal to meaningfully address safety issues through good faith bargaining gave us no other option but to expand our work stoppage," Gerard said in a statement. No new talks had been scheduled between the two sides. Shell and the USW were near an agreement for a new contract on Friday night, but other oil companies were unwilling to accept the bargain, said sources familiar with the talks. "As the lead company, Shell has the role to get the oil companies to come along," said one of the sources. "The (union) leadership group decided Shell needed to be put on the list of targeted companies." Shell spokesman said it was disappointed by the new strikes. In a letter Shell has sent to striking employees at its Deer Park, Texas, refinery and chemical plant, a copy of which was seen by Reuters, the company said the key sticking point was non-union contractors who perform daily maintenance, which the USW would like to see replaced with union workers. The company said it needed flexibility. "Hiring flexibility is a proven way to protect our core Shell workforce and the long-term economic viability of our workforce," the letter said. "This strategy has served us all well, as we have not had to conduct any layoffs in decades." The strike that began Feb. 1 was last expanded Feb. 6, when workers at BP Plc-operated refineries in Indiana and Ohio were told to begin a work stoppage the following day. Workers were already on strike at Shell's 327,000 bpd joint-venture refinery in Deer Park since the strike began on Feb. 1. The strike may complicate operations at the Port Arthur refinery, where two of three crude distillation units, the workhores of the refinery, are running below capacity and fuel-making units are shut for repairs or refurbishment. Shell and the union met continuously from Wednesday through Friday following a week-long break for the company to reply to an information request and a counterproposal from the USW. Union negotiators have rejected seven contract offers from Shell. The USW's lead negotiator, International Vice President Gary Beevers, has told Reuters that safe staffing levels were a point of contention in the talks. The union also wants "no retrogression" language, which preserves agreements from previous contracts. In addition to the BP, Motiva and Shell plants, workers are striking at ones owned by Lyondell Basell, Marathon Petroleum, and Tesoro in California, Kentucky, Texas and Washington. Only one refinery has shut down due to the strike. Tesoro's 166,000-bpd plant in Martinez, California, which was previously scheduled to undergo maintenance. The USW wants a three-year pact that would cover 30,000 workers at 63 US refineries with two-thirds of domestic capacity. Refiners are using trained replacement workers, primarily managers and engineers to keep plants running at near normal rates.