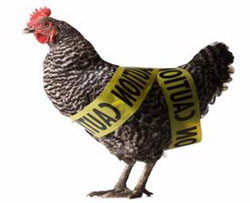 PARIS - The United States has reported a mild form of bird flu on a turkey farm in California, the World Organisation for Animal Health (OIE) said on Wednesday, the latest in a series of outbreaks to hit the US poultry industry in recent months. The US Department of Agriculture said in a report posted on the OIE website that a commercial turkey flock in Merced County, near San Francisco, had been coughing with a slight increase in mortality last week. Samples were submitted for laboratory testing and were confirmed positive for low pathogenic H7N3 avian influenza, it said. The infected premises was placed under quarantine following preliminary findings and an epidemiological investigation was initiated, it said. Follow-up surveillance and testing on 10 associated farms showed negative results for bird flu. The strain discovered differed from the highly pathogenic H5N2 avian flu which has been found recently in other states, notably Arkansas, the heart of America's poultry producing region. It was also different from the highly pathogenic H5N8 bird flu found on a Californian turkey farm in January which prompted five export markets to bar imports of poultry from the state. Bird flu viruses are divided into two groups based on their ability to cause disease, or pathogenicity. Highly pathogenic bird flu spreads rapidly, may cause serious disease and has high death rates in birds. The H5N1 and H7N9 types have also been found in humans, causing several hundred deaths. Low pathogenic bird flu causes milder disease that may be undetected. However, the H7 variant can mutate into a highly pathogenic type, prompting extreme precaution even in cases of low pathogenic outbreaks. - Reuters