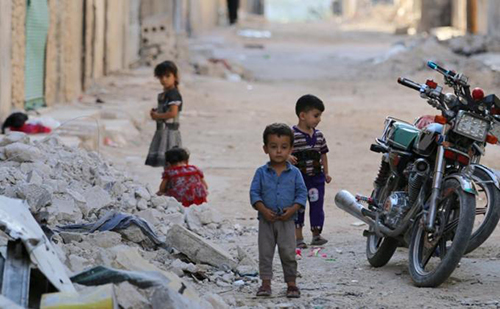 WASHINGTON – The United States and Russia are nearing a deal that would set a 48-hour ceasefire in Aleppo, allow UN humanitarian access and limit Syrian government aircraft flights, diplomatic sources said on Friday. The sources, who spoke on condition of anonymity, said the deal is not set in stone, key elements are still being discussed and critical stakeholders, including US Defense Secretary Ash Carter and Syrian opposition groups, are likely to have doubts. If a deal were reached, it could lead to US intelligence sharing with Russia that would allow Russian forces to target fighters of the group formerly known as Nusra Front, which the United States views as a terrorist group linked to al Qaeda. "It's not done yet," said one source, saying US Secretary of State John Kerry and Russian Foreign Minister Sergei Lavrov could announce a deal, if one is reached, as early as Sunday, though it appeared to be slipping to Monday or beyond. Among the elements of the deal under discussion are: - immediate humanitarian access to Aleppo via the Castello Road, which is currently controlled by Syrian government forces; - government checkpoints on the road would only be allowed to verify that U.N. seals on humanitarian trucks were intact, but not to inspect the cargoes or to remove their contents; - Syrian government aircraft would be limited to "non-combat" flights in designated areas; - if the agreement were respected, the United States could share intelligence to allow Russian forces to target the group formerly known as al Nusra. The militant group, which is seeking to topple Syrian President Bashar al Assad, in July said it had cut its ties to al Qaeda and changed its name to Jabhat Fatah al-Sham, but Washington still regards it as a terrorist group. It was not clear what, if anything, the deal might say about a nationwide cessation of hostilities, something the United States has been seeking to restore since it unraveled earlier this year. Kerry and Lavrov failed a week ago in Geneva to reach a breakthrough deal on military cooperation and a nationwide cessation of hostilities in Syria, saying they still had issues to resolve before an agreement could be announced. The talks have been complicated since initial meetings in July by new government attacks on opposition groups and a major offensive in the southern part of the divided city of Aleppo led by opposition fighters intermingled with the Nusra Front.
The United States and Russia back opposing sides in Syria's civil war, which shows little sign of ending after 5-1/2 years of violence in which as many as 400,000 have died and half the country's prewar population has been uprooted.Assad's future is not a focus of the current US-Russian talks. Instead, they are focused on ending the violence as a first step to resuming on-again, off-again negotiations on a political transition in Syria. Among those likely to oppose the emerging deal are opposition groups which do not wish to return to talks until there is a wider halt to the violence and US military officials loath to share sensitive information with Russia. The idea of sharing intelligence with Russia has caused disquiet among countries in the anti-Islamic State coalition, some of whose Arab members bitterly resent Russia’s military intervention to prop up Assad. A US State Department spokesman declined to comment on the possibility of a deal. –Reuters