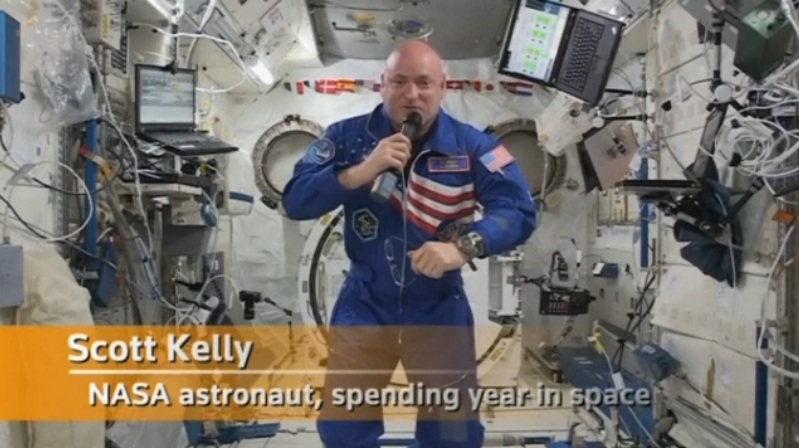 CAPE CANAVERAL, FLA - A Russian Soyuz rocket blasted off from the Baikonur Cosmodrome in Kazakhstan on Friday, sending a US-Russia crew to the International Space Station for a year-long flight, a NASA Television broadcast showed. The capsule holding NASA astronaut Scott Kelly, 51, and cosmonauts Mikhail Kornienko, 54, and Gennady Padalka, 56, slipped into a docking port on the station’s Poisk module at 9:33 p.m. EDT/0133 GMT. The trio blasted off about six hours earlier. Kelly and Kornienko are slated to make the first year-long stay on the orbital outpost, double the current mission durations. Padalka, who is making his fifth flight, will return to Earth in September after racking up 878 days in space, setting a new record for the total amount of time anyone has spent in space. Four Soviet-era cosmonauts lived on the now-defunct Mir space station for a year or longer, but the missions, which concluded in 1999, did not have the sophisticated medical equipment that will be used during International Space Station investigations, NASA said. Scientists are interested in seeing how the human body fares during longer stays in space, as the United States and other countries begin planning for multi-year missions to Mars. In addition to more exposure to radiation, astronauts experience bone and muscle loss and changes in their cardiovascular, immune and other systems. Kelly and Kornienko will participate in a battery of experiments before, during and after their flight to assess psychological and physiological changes from being in microgravity for a year. A third participant is Kelly’s identical twin brother, Mark Kelly, a former NASA astronaut who will serve as a ground-based subject for genetic and other studies. “The classic question is ‘How much of our health and our behavior is determined by our genes, and how much by our environment?’ – the nature versus nurture discussion,” Craig Kundrot, deputy chief scientist of NASA’s Human Research Program, said in a NASA interview. “In this case, we’ve got two genetically identical individuals and we can monitor what kind of changes occur in Mark in an ordinary lifestyle and compare that to the changes that we see in Scott in flight,” he said. While no definitive conclusions can be made from a study of a single set of twins, scientists hope the experiments may provide clues for follow-up investigations. The station, a $100 billion project of 15 nations, is a research laboratory that flies about 260 miles (418 km) above Earth. - Reuters