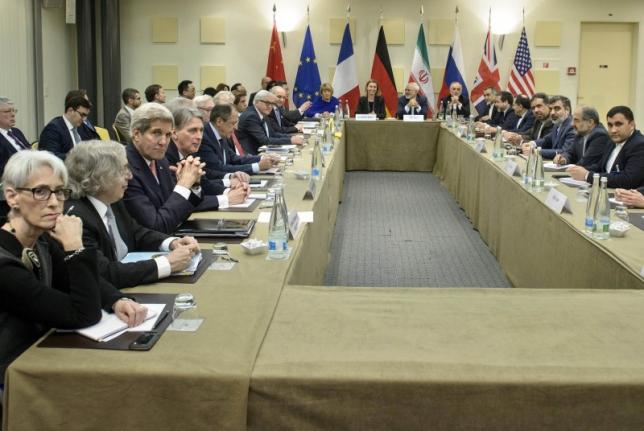 LAUSANNE, SWITZERLAND - The United States said it was prepared to work past a midnight deadline into Wednesday if progress was being made towards clinching a preliminary nuclear deal between Iran and global powers. Negotiations appeared to be bogged down on an outline agreement aimed at curbing sensitive Iranian nuclear activities, while officials cautioned that any agreement would likely be fragile and incomplete. "Our team is evaluating where we are throughout the day and making decisions about the best path forward," a senior State Department official said, speaking hours before the self-imposed March 31 deadline was due to expire. "We will of course keep working if we are continuing to make progress, including into tomorrow if it’s useful to do so." A Western diplomat indicated that the talks were still focused on crucial sticking points. For nearly a week, the United States, Britain, France, Germany, Russia and China have been trying to break an impasse in the talks, which are aimed at stopping Iran from gaining the capacity to develop a nuclear bomb in exchange for easing international sanctions that are crippling its economy. But disagreements on enrichment research and the pace of lifting sanctions threatened to scupper a deal that could end a 12-year standoff between Iran and the West over Tehran's nuclear ambitions and reduce the risk of another Middle East war. Iran says its nuclear program is peaceful. "The two sticking points are the duration and the lifting of sanctions," an Iranian official said. "The two sides are arguing about the content of the text. Generally progress has been made." Officials played down expectations for the talks in the Swiss city of Lausanne. For days they have been trying to agree on a brief document of several pages outlining headline numbers to form the basis of a future agreement. Officials said they hoped to be able to announce something, though one Western diplomat said it would be "incomplete and kick some issues down the road". Officials said they were hoping to agree on some kind of declaration, while any actual preliminary understanding that is agreed might remain confidential. It was also possible they would not agree on anything. "We are preparing for both scenarios," another Western diplomat said. Officials, who were shuffling from plenaries to bilateral meetings as the midnight deadline approached, said talks on a framework accord, intended as a prelude to a comprehensive agreement by the end of June, could yet fall apart. Speaking in Berlin with German Chancellor Angela Merkel, French President Francois Hollande said it would be better to have no deal than a bad deal. A deal on Iran's nuclear program would almost certainly lift sanctions only in stages, deferring even a partial return of Iranian crude exports until at least 2016. Sanctions have halved Iran's oil exports to just over 1 million barrels per day since 2012 when oil and financial sanctions hit Iran. Brent crude oil dropped towards $55 a barrel on Tuesday as talks entered the final day of a deal that could see the energy-rich country increase oil exports to world markets. STICKING POINTS The real deadline in the talks, Western and Iranian officials said, was not Tuesday but June 30. They said the main sticking points were the removal of UN sanctions and Iranian demands for the right to unfettered research and development into advanced nuclear centrifuges after the first 10 years of the agreement expires. Iran said the key issue was lifting sanctions quickly. "There will be no agreement if the sanctions issue cannot be resolved," Majid Takhteravanchi, an Iranian negotiator, told Iran's Fars news agency. "This issue is very important for us." The six powers want more than a 10-year suspension of Iran's most sensitive nuclear work. Tehran denies it is trying to develop a nuclear weapons capability. Russian Foreign Minister Sergei Lavrov said that he believed there was a good chance of success. "The odds are quite 'doable' if none of the parties raise the stakes at the last minute, he told reporters in Moscow before returning to Lausanne. Both Iran and the six have floated compromise proposals, but Western officials said Tehran has recently backed away from proposals it previously indicated it could accept, such as on shipping enriched uranium stocks to Russia. Officials said dilution of the stockpiled uranium was an option, saying that the stockpiles issue was not a dealbreaker. The goal of the negotiations is to find a way to ensure that for at least the next 10 years Iran is at least one year away from being able to produce enough fissile material for an atomic weapon. In exchange for temporary limits on its most sensitive atomic activities, Tehran wants an end to sanctions. Iran and the six powers have twice extended their deadline for a long-term agreement, after reaching an interim accord in Geneva in November 2013. The US Congress has warned it will consider imposing new US sanctions on Iran if there is no agreement this week, giving a sense of urgency to the talks. "With Congress, the Iranian hawks and a Middle East situation where ‎nobody's exactly getting on, I'm not convinced we'll get a second chance if this fails," a senior Western diplomat said. US President Barack Obama has threatened to veto any sanctions moves by the Republican-dominated Congress. In Jerusalem, Prime Minister Benjamin Netanyahu reiterated Israel's concern that an agreement would fall short of guaranteeing its safety. The framework agreement would leave Iran with the capability to develop a nuclear weapon in under a year, said Netanyahu, whose country is believed to have the Middle East's only nuclear arsenal. - Reuters