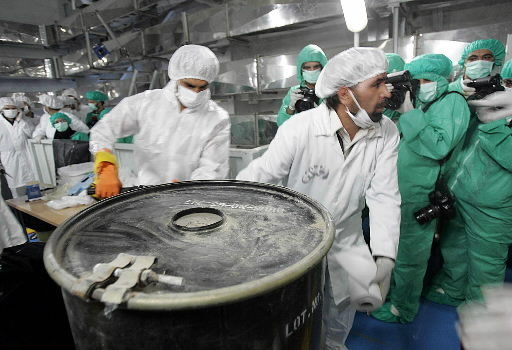 WASHINGTON - Iran would not necessarily have to ship its stockpile of highly enriched uranium abroad under a nuclear pact with major powers, US State Department spokeswoman Marie Harf said on Monday. "You don't have to ship it out of the country to get to a year breakout time," she said in a conference call, referring to the goal of stretching the amount of time it would take Iran to acquire enough fissile material to make one atomic bomb. "You can have some other dispositions for it that get us where we need to be in terms of our bottom line," Harf said. Iran and six major powers are seeking to negotiate a deal under which Tehran would halt its most sensitive nuclear work in return for an easing of the economic sanctions crimping its economy. Echoing earlier US statements, Harf said there was an even chance of reaching an agreement. "We still see a path to get a political understanding," she said. "There is still a path to do this. I would probably say (a) 50-50 chance we will get it done." Tuesday is the self-imposed deadline for Britain, China, France, Germany, Russia and the United States to strike a framework nuclear deal with Iran. While several officials have told Reuters that Iran indicated willingness to send most of its enriched uranium away for storage in Russia, senior Iranian negotiator Abbas Araqchi said on Sunday that sending stockpiles abroad "was not on Iran's agenda." Harf said that the two sides had never had an agreement on shipping enriched uranium abroad and said there were different ways to achieve the US goal of extending Iran's "breakout time" to one year. "For months we have been talking with Iran about the different ways they can get rid of that stockpile. One is obviously dilution in country, as they have been doing. One is shipping it overseas," Harf said. "This is one we have to resolve, but we haven't yet." - Reuters