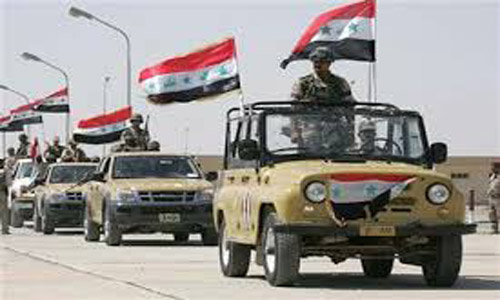 WASHINGTON (Reuters) - An Iraqi and Kurdish military force of some 20,000 to 25,000 troops is being prepared to recapture the city of Mosul from Islamic State fighters, probably in the April-May time frame, an official at the US Central Command said on Thursday. The official said Mosul was currently being held by 1,000 to 2,000 Islamic State fighters. No decision has been made on whether small numbers of US military advisers might need to be on the ground close to Mosul to direct close air support, the official told a group of reporters on condition of anonymity. Mosul, which had a population of over 1 million people, was captured by Islamic State fighters in June and is the largest city in the group's self-declared caliphate, a stretch of territory that straddles the border between northern Iraq and eastern Syria. The main attack force being assembled for the Mosul campaign would include five Iraqi army brigades, the official said. Three smaller brigades would act as a reserve force, and three brigades of Kurdish peshmerga troops would contain the city from the north and isolate it from Islamic State forces further west. A so-called Mosul fighting force consisting mainly of former Mosul police officers and tribal fighters also is being assembled for the assault, the official said. About a brigade of counterterrorism troops also would be employed in the fight, he said. The total number of troops would be 20,000 to 25,000. The aim of Iraqi and US military leaders is to have all five Iraqi army brigades that comprise the main attack force participate in US-led training currently going on in Iraq. That will begin once the present batch of 3,200 trainees rotate out of the five training sites, the official said. The official said the timing of the offensive would ultimately depend on the readiness ofIraqi forces, which collapsed last summer as Islamic State conquered Mosul, the country's second-largest city, and raced across northern Iraq. It is highly unusual for the US military to openly telegraph the timing of an upcoming offensive, especially to a large group of reporters. Asked why the exception was being made for the Mosul offensive, which the Pentagon has described as a pivotal battle in the overall campaign in Iraq, the official said it was a reflection of the confidence of Iraq, which had devised the battle plan. "They are absolutely committed to this. There are a lot of pieces that have to come together and we want to make sure the conditions are right. But this is their plan. They have bought into it. They are moving forward as if they will execute in the time frame that I just described," the official said.