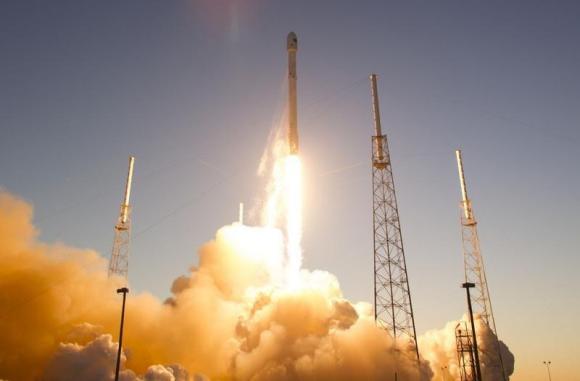 WASHINGTON - The US Air Force said on Monday it was on track to certify privately held SpaceX to launch US military and spy satellites by June, with the final efforts focused on qualifying the second stage engine and structure of its Falcon 9 rocket. The Air Force said it had worked closely with Space Exploration Technologies, or SpaceX, to map out the "relatively small amount of work" that needs to be done before completing the certification process. Once certified, SpaceX will be allowed to compete for some of the launches now carried out solely by United Launch Alliance, a joint venture of Lockheed Martin Corp and Boeing Co, the two largest US weapons makers. Officials also are looking at contamination control as they wrap up the SpaceX certification process, the Air Force said. The Air Force said it and SpaceX planned to revise a June 2013 agreement about the certification process to adopt recommendations made after the first phase of an independent review ordered by Air Force Secretary Deborah James in January. The Air Force said the panel, led by former Air Force Chief of Staff Larry Welch, had recommended ways to better focus the certification process on the new entrant's ability to deliver hardware, support and processes to meet requirements. It said the panel carried out in-depth discussions with key personnel at the Air Force's Space and Missiles Systems Center and SpaceX, and a close review of the certification documents and data, during the first phase of the review. No further details about specific recommendations were immediately available. James praised the review team's diligent and prompt work and said she remained committed to "bold innovation, competitive space launches, and improved partnership with industry." SpaceX Chief Executive Elon Musk welcomed the Air Force's decision to review and revise the certification process. The Air Force said the second phase of the independent review would examine the broader process for certifying new entrants to the space launch business. On Monday, United Launch Alliance said it would let Americans vote over the next two weeks whether to name its new rocket Eagle, Freedom, or GalaxyOne. The name will be announced April 13, it said. ULA is reacting to the rapid rise of SpaceX by racing to lower launch costs and attract more commercial customers.