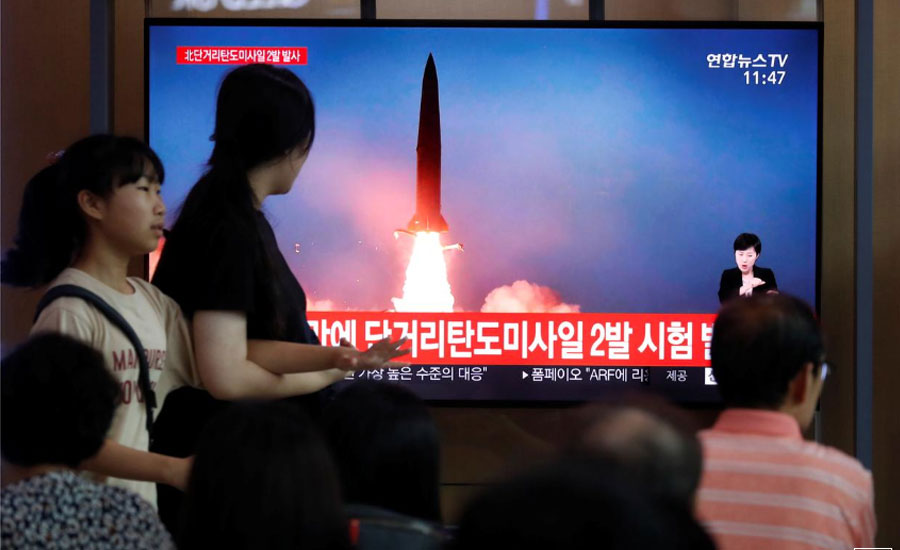 SEOUL/WASHINGTON (Reuters) - North Korea’s latest missile launches did not violate a pledge its leader Kim Jong Un made to US President Donald Trump, a senior US official said on Thursday, but efforts to resume denuclearisation talks remained in doubt.
Kim oversaw the first test firing of what North Korean state media called a “new-type large-calibre multiple-launch guided rocket system” on Wednesday. North Korean television showed rockets launching from a vehicle that had been blurred in photos to obscure its features. U.S. officials said North Korea appeared to have carried out a new projectile launch early on Friday Korea time, adding that initial information indicated the activity was similar to the other recent tests. The officials said it was unclear how many projectiles had been launched in the latest test. The launches came days after North Korea tested two short-range ballistic missiles on July 25 and despite a meeting between Kim and Trump on June 30 at which the agreed to revive stalled denuclearisation talks. The tests appeared intended to put pressure on South Korea and the United States to stop planned military exercises and offer other concessions and came as diplomats criss-crossed the region this week in the hope of restarting the talks. “The firing of these missiles don’t violate the pledge that Kim Jong Un made to the president about intercontinental-range ballistic missiles,” US national security adviser John Bolton said in an interview with Fox Business Network. “But you have to ask when the real diplomacy is going to begin, when the working-level discussions on denuclearisation will begin,” he said. “We’ve been waiting to hear since June the 30th,” Bolton told the network in a subsequent interview. “We’re ready for working-level negotiations. The president’s ready, when the time is right, for another summit. Let’s hear from North Korea.” South Korea and Japan were concerned by the launches, “because they’re within range, we think, of this particular missile,” Bolton added without mentioning the tens of thousands of US troops based in both countries.

Massachusetts Institute of Technology professor Vipin Narang said the missile tests were part of the North Korean leader’s approach to diplomacy: “He’s saying it will take more than a photo op to get things moving.” While Trump and his administration have sought to play down the tests, Narang said they were a stark reminder that every day Washington and its allies fail to secure an agreement North Korea continues to improve and expand its nuclear and missile arsenals. On Thursday, Secretary of State Mike Pompeo said he hoped talks would start soon, though he “regretted” that a highly anticipated meeting with North Korean Foreign Minister Ri Yong Ho would not take place in Thailand this week. Ri has cancelled a trip to an Association of Southeast Asian Nations (ASEAN) conference in Bangkok that Pompeo is attending. “We stand ready to continue our diplomatic conversation,” Pompeo told a news conference in Bangkok, adding that he was optimistic Kim would deploy his team for working-level talks “before too long”. At the United Nations on Thursday, Britain, France and Germany called on North Korea to engage in “meaningful” talks with the United States and said international sanctions needed to be fully enforced until Pyongyang dismantled its nuclear and ballistic missile programs. Their statement came after a closed-door UN Security Council meeting on the latest launches. UN Secretary-General Antonio Guterres said the launches were a reminder of the need to restart denuclearisation talks. China, North Korea’s neighbour and main ally, welcomed the US readiness to restart working-level talks, top Chinese diplomat Wang Yi said in Bangkok, following talks with Pompeo. While China has signed up for UN sanctions on North Korea, Chinese President Xi Jinping urged Trump in a meeting in Japan last month “to show flexibility and meet the North Koreans half way, including easing sanctions in due course.” The United States and North Korea have yet to narrow key differences and a summit between Trump and Kim in Vietnam in February collapsed over US demands for North Korea’s complete denuclearisation and North Korean demands for sanctions relief. North Korea has accused Washington of breaking a promise by planning to go ahead with military drills with South Korea this month and has said they could derail dialogue. It has also warned of a possible end to its freeze on nuclear and long-range missile tests in place since 2017, which Trump has repeatedly held up as evidence of the success of his engagement with Kim. A senior US defence official said on Wednesday that the United States did not plan to make changes to the drills.

South Korea’s Joint Chiefs of Staff said North Korea had fired ballistic missiles on Wednesday that flew about 250 km (155 miles). Such launches are banned under UN resolutions designed to press North Korea to give up its nuclear weapons and missile programs. North Korean images of the launches appeared to show a type of multiple-launch rocket system (MLRS). Such systems form a major part of North Korea’s conventional arsenal, according to a 2018 assessment by South Korea’s defence ministry. North Korean media said the tests verified the combat effectiveness of the overall rocket system and Kim predicted “it would be an inescapable distress to the forces becoming a fat target of the weapon.” The North Korean military has nearly 5,500 MLRS, along with 8,600 field guns, 4,300 tanks, and 2,500 armoured vehicles, the ministry said.