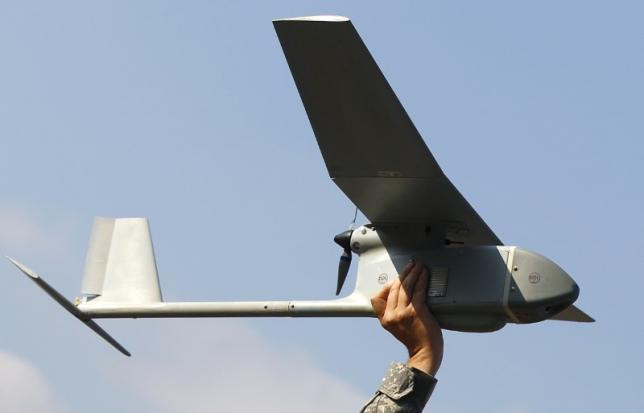 WASHINGTON - Millions of dollars' worth of US-supplied drones that Kiev had hoped would help in its war against Russian-backed separatists have proven ineffective against jamming and hacking, Ukrainian officials say. The 72 Raven RQ-11B Analog mini-drones were so disappointing following their arrival this summer that Natan Chazin, an advisor to Ukraine's military with deep knowledge of the country's drone programme, said if it were up to him, he would return them. "From the beginning, it was the wrong decision to use these drones in our (conflict)," Chazin, an advisor to the chief of the general staff of Ukraine's armed forces, told Reuters. The hand-launched Ravens were one of the recent highlights of US security assistance to Ukraine, aiming to give Kiev's military portable, light-weight, unarmed surveillance drones that were small enough to be used widely in the field. They are made by AeroVironment (AVAV.O). But they appear to have fallen short in a battle against the separatists, who benefit from far more sophisticated military technology than insurgencies the West has contended with in Afghanistan, Iraq or Syria. Whether President-elect Donald Trump's administration might seek to provide Kiev anything more robust, however, is unclear, given his stated desire to improve ties with Russia and prioritise the fight against Islamic militants. US restrictions on technology exports could also limit new aid. The Air Force command of Ukraine's armed forces acknowledged to Reuters that the Ravens supplied by the United States had a fundamental drawback: Russia and the separatist forces it supports can intercept and jam their video feeds and data. "The complex is analogue, therefore command channels and data are not protected from interception and suppression by modern means of electronic warfare," it said. US officials, speaking on condition of anonymity, acknowledged that Russia's electronic warfare capabilities were far more sophisticated than thought when the conflict began and that both the US and Ukrainian militaries were adapting. Asked about Ukraine's reaction to the Ravens, one official said it took a considerable amount of time for the drones to reach Ukraine and that by then "they were much less effective than they would have liked, than we would have liked." AeroVironment referred questions from Reuters about the Raven contract to the US Army. The US Army told Reuters it still uses Ravens but has upgraded to digital versions. "STONE AGE" Some 38 Ukrainian students were trained at Redstone Arsenal in Alabama on how to operate the drones between March and July this year, a US Army spokesman said. Ukraine said it distributed the Ravens across the services and gave one batch to the Zhytomry Military Institute for training purposes. There were mixed accounts on how much the Ravens were being used in Ukraine, which saw Crimea annexed by Russia in 2014 and which has been fighting Russian-backed separatist forces in the east. Nearly 10,000 people have died in the conflict. The Air Force command of Ukraine's armed forces said they were being used in the "Anti-Terrorist Operation" zone, including in combat situations. One Ukrainian official, however, speaking to Reuters on condition of anonymity, said that although drones were being used in the zone, they were not employed on the front lines. Chazin said they were largely in storage and called them a vulnerability, allowing the enemy to see Ukrainian military positions and, when it wanted, easily take them down. They had short battery life and were unable to reliably fulfil the key mission of gaining intelligence on artillery positions, he said. "(Analogue) basically puts you back in the stone age of the UAVs," said James Lewis, director of the strategic technologies programme at the Center for Strategic and International Studies, using an acronym for Unmanned Aerial Vehicles, or drones. "I'm not being critical of the Raven. I love the Raven ... But it's a cheap, disposable UAV. And for more intense conflict, that may not cut the ice anymore." TRUMP'S UKRAINE POLICY? The drones, along with other US-supplied items like radar, first-aid kits, night vision and communications gear, fit into President Barack Obama's strategy of providing non-lethal military assistance while focusing on sanctions and diplomacy to end the war. Within that context, the miniature drones, even though small, were a noteworthy element of the more than $600 million (£485.6 million) in training and equipment that the United States has provided Ukraine so far. Ukraine pegged the Raven programme's value at over $12 million. How Trump might alter US support remains unclear, particularly given cabinet picks that include retired Marine General James Mattis, who has been vocal about his concerns about Russia and was nominated to become US defence secretary. Some of the most prominent Republican lawmakers in Congress have called for Ukraine to receive lethal arms. "If anything, it creates a new opportunity," said Luke Coffey at the Heritage Foundation, a conservative Washington think-tank. Ukrainian officials have sought to put a brave face on Trump's election, downplaying comments on the campaign trail that included appearing to recognise Crimea as part of Russia and contemplating an end to US sanctions on Russia. Ukraine's President Petro Poroshenko is expected to visit Washington next year, and US assistance is sure to be high on his agenda. Topping Ukraine's wish list are Javelin anti-tank missiles made by made by Raytheon (RTN.N) and Lockheed Martin (LMT.N). The top US military officer in Europe, General Curtis Scaparrotti, told a Senate hearing this year "there's a requirement for an anti-tank weapon, like Javelin." One of the US officials cautioned about limitations on America's ability to export drones that can evade Russia's electronic warfare capabilities. That could leave Ukraine's military to continue building drones from commercially available technology. It now assembles them from components supplied by firms in countries such as Australia, China and the Czech Republic for only $20,000 to $25,000 apiece, Chazin said, and they are more advanced than the more pricey Ravens, which are often funded from private donations. -Reuters