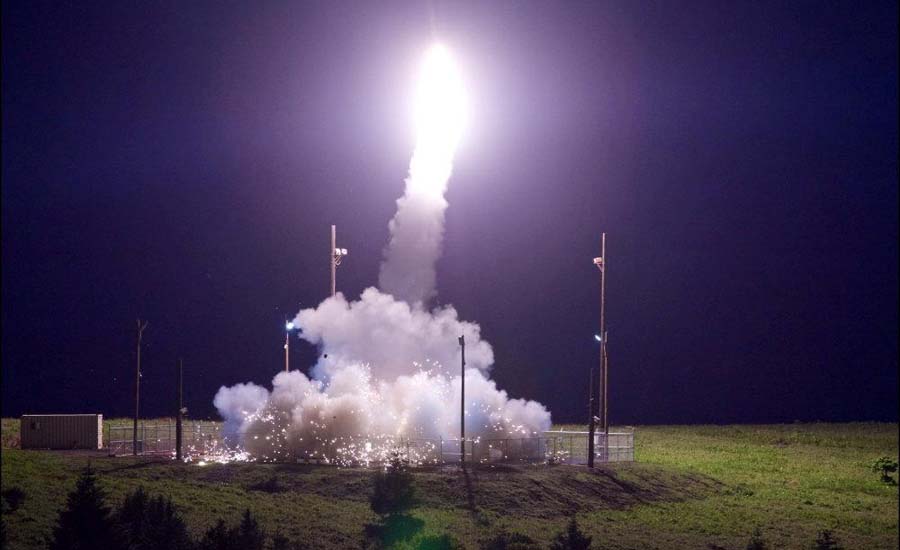 WASHINGTON - The United States said it shot down a simulated, incoming intermediate-range ballistic missile (IRBM) similar to the ones being developed by countries like North Korea, in a new test of the nation's THAAD missile defences.

Planned months ago, the US missile defence test over the Pacific Ocean has gained significance after North Korea's July 4 launch of an intercontinental ballistic missile (ICBM) heightened concerns about the threat from Pyongyang.

The test was the first-ever of the Terminal High Altitude Area Defense (THAAD) system against an incoming IRBM, which experts say is a faster and more difficult target to hit than shorter-range missiles.

The US Missile Defense Agency said the IRBM was designed to behave similarly to the kinds of missiles that could threaten the United States.

"The successful demonstration of THAAD against an IRBM-range missile threat bolsters the country's defensive capability against developing missile threats in North Korea and other countries," the Missile Defense Agency said in a statement.

The successful THAAD test adds to the credibility of the US military's missile defence programme, which has come under intense scrutiny in recent years, including because of test delays and failures.

The US Government Accountability Office, a federal watchdog, noted in a May report that the Missile Defense Agency had not previously tested THAAD against an IRBM, despite having deployed the system to the island of Guam, a US territory in the Pacific, in 2013 amid concerns about North Korea's missile programme.

In order to hit the mainland United States, North Korea would need to fire an ICBM, which is defined as a missile with a range greater than 3,400 miles (5,500 km).

In the latest test, a THAAD in Kodiak, Alaska, intercepted a ballistic missile target that was air-launched from a C-17 aircraft flying north of Hawaii, the Missile Defense Agency said in a statement. A defence official, speaking on condition of anonymity, said the test took place early on Tuesday.

This success leaves THAAD with a 100 percent track record for all 14 intercept attempts since flight testing began just over a decade ago.

Lockheed Martin Corp, the prime contractor for the THAAD system, said it could intercept incoming missiles both inside and outside the Earth's atmosphere.

The United States deployed THAAD to South Korea this year to guard against North Korea's shorter-range missiles. That has drawn fierce criticism from China, which says the system's powerful radar can probe deep into its territory.

Earlier this month Moscow and Beijing, in a joint statement, called on Washington to immediately halt deployment of THAAD in South Korea.

The statement said Washington was using North Korea as a pretext to expand its military infrastructure in Asia and risked upsetting the strategic balance of power in the region.

THAAD's success rate in testing is far higher than the one for America's Ground-based Midcourse Defense (GMD) system, which is designed to shoot down an ICBM headed for the US mainland.

That GMD system has only a 55 percent success rate over the life of the programme, stoking fierce criticism from groups including the Union of Concerned Scientists, a non-profit science advocacy group.

But advocates say the technology has improved dramatically in recent years. The GMD system successfully shot down an incoming, simulated North Korean ICBM in a test in May.

That led the Pentagon to upgrade its assessment of the United States' ability to defend against a small number of ICBMs, according to an internal memo seen by Reuters.

John Schilling, a contributor to 38 North, a Washington-based North Korea monitoring project, downplayed the idea that THAAD might be seen as a backup to hit a longer range ICBM, saying that THAAD was not designed to hit missiles travelling so fast.

"To engage an ICBM with THAAD would be like asking a high school baseball player to hit a fastball from a major-league pitcher - literally out of his league," Schilling said.

The Missile Defense Agency told Congress in June that it planned to deliver 52 more THAAD interceptors to the US Army between October 2017 and September 2018, bringing total deliveries to 210 since May 2011. -Reuters