US trade gap widens as exports of soybeans, other goods fall 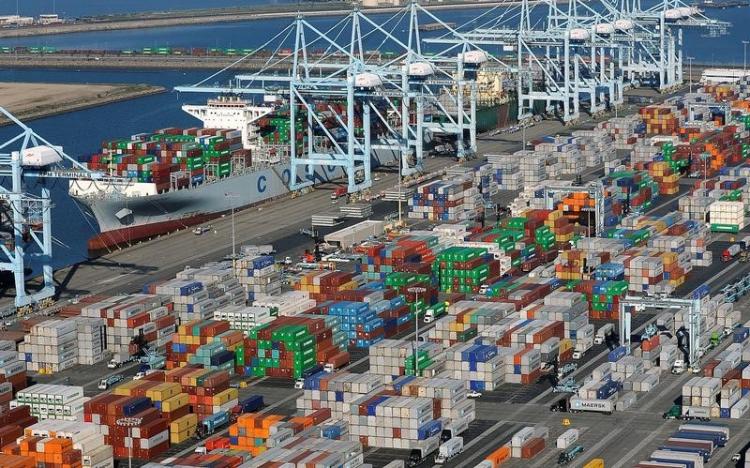 US trade gap widens as exports of soybeans, other goods fall

WASHINGTON – The US trade deficit recorded its biggest increase in more than 1-1/2 years in October as exports of soybeans and other goods dropped, suggesting that trade would be a drag on growth in the fourth quarter. The Commerce Department said on Tuesday the trade gap widened 17.8 percent to $42.6 billion. That was the largest percentage increase since March 2015. Economists had forecast the trade gap increasing to $41.8 billion in October after a previously reported $36.4 billion shortfall. When adjusted for inflation, the deficit rose to $60.3 billion from $54.2 billion in September. Exports contributed 0.87 percentage point to the third quarter's 3.2 percent annualized rate of increase in gross domestic product. The jump in exports in the last quarter largely reflected a surge in soybean shipments after a poor harvest in Argentina and Brazil. While the reversal in soybean shipments, which is weighing on exports, suggests that trade is likely to subtract from GDP growth in the fourth quarter, consumer spending and a firming housing market are expected to keep supporting the economy. Rising gas and oil well drilling in response to increasing oil prices is also expected to boost growth this quarter. The Atlanta Federal Reserve is currently forecasting GDP rising at a 2.9 percent rate in the fourth quarter. Prices for U.S. government debt were largely flat after the data, while U.S. stock index futures were trading slightly higher. The dollar .DXY rose against a basket of currencies. Exports fell 1.8 percent to $186.4 billion in October. They were held down by declining shipments of food, industrial supplies and materials, automobiles and consumer goods. Exports of soybeans, which helped power the economy in the third quarter, fell in both October and September. However, exports of capital goods were the highest in October since December 2015. Some of the drag on exports reflects the residual effects of the dollar's surge against the currencies of the United States' main trading partners between June 2014 and January 2016. With the dollar resuming its rally in the wake of Donald Trump's victory in the Nov. 8 presidential election, exports could struggle in early 2017. RISING IMPORTS In October, exports to the European Union fell 1.1 percent, with goods shipped to the United Kingdom tumbling 12.2 percent. But exports to China surged 32.8 percent to their highest level since December 2013, while shipments to Japan were the highest in more than two years. Imports of goods and services increased 1.3 percent to $229.0 billion in October, the highest level since August 2015. There were increases in food, capital goods and consumer imports. But imports of automobiles and industrial supplies and materials fell. Imports of petroleum goods were the highest in a year, reflecting an increase in crude oil prices. Imports from China rose 4.2 percent to their highest level in a year. With exports outpacing imports, the politically sensitive U.S.-China trade deficit fell 4.2 percent to $31.1 billion in October. In a separate report on Tuesday, the Labor Department said nonfarm productivity, which measures hourly output per worker, rose at an unrevised 3.1 percent rate in the third quarter. While the increase snapped three straight quarters of decline, the trend in productivity remains weak. Productivity was unchanged compared to the third quarter of 2015. Unit labor costs, the price of labor per single unit of output, rose at an upwardly revised 0.7 percent pace in the third quarter. They were previously reported to have increased at a 0.3 percent rate. Unit labor costs rose at a 3.0 percent rate compared to the same period of 2015. Hourly compensation per hour increased at a 3.8 percent rate in the third quarter rather than the 3.4 percent pace reported in November. Hourly compensation rose at a 3.0 percent rate from a year ago. –Reuters